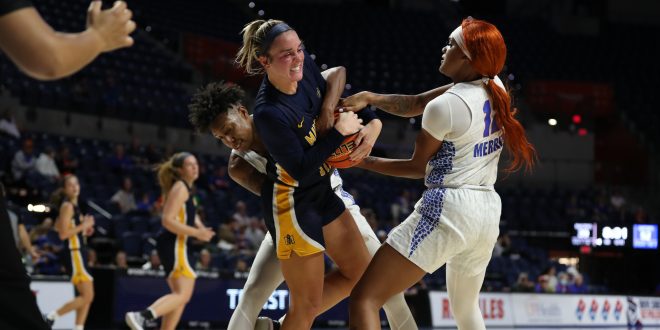 Also, Head Coach Kelly Rae Finley gets to double-digit wins at the helm for the first time, winning 77 percent of their games so far. With Tuesday’s victory, the Gators have now won nine of their last 10 games.

Leading the way for the Gators was guard Lavender Briggs who scored a team-high 12 points and six rebounds. Guard Kiara Smith and Alberte Rimdal also scored in double figures as they combined for 21 points. For the opposition, guard Macey Turley led with 14 points and four assists.

The biggest factor for another home victory was the constant defensive pursuit and pressure by the Gators. Murray State was unable to counter the speed and active hands of the Orange and Blue as they were held to a season-low in points.

Rae Finley was pleased with the effort and defensive pursuit.

Throughout the matchup, the Racers carelessly turned the ball over at an alarming rate which they couldn’t overcome. It was a season-best for the Gators as they forced an impressive 25 turnovers resulting in 22 points off those miscues.

Finley and the Gators didn’t have the ideal start on the offensive end. Florida shot a mere 40 percent in the first quarter, 8-for-20 from the floor.

However, the Orange and Blue’s relentless effort on defense helped the Gators force six turnovers in the period as the Racers shot 5-for-13 from the floor. Off the bench, Alberte Rimdal led Florida in the first period with six points. Including, two dagger three-pointers from the wing. For the game, the 5-foot-3 guard shot 3-for-4 from beyond the arc.

Rae Finely raves about the talent and growth of the freshman guard.

The Gators continued their defensive dominance in the second quarter, as both teams struggled offensively. In the period, both teams combined for 7-for-34 from the floor. However, after a Zippy Broughton and-one to close the half, Florida led with a 28-23 advantage.

Another strong third quarter for the Gators, which has been a continued theme for Florida, helped them take control. During the period, Florida led by as many as 12 points including a tremendous dish by Emanuel de Oliviera to Briggs early in the quarter. With 6:21 left in the quarter, the Racers were able to cut the deficit to four.

Unfortunately, it wasn’t enough as a mini-scoring spurt by Briggs helped a 9-2 to bring the lead back to 12. After three, Florida led 49-37 heading into the final period.

From there, coach Finley and the Gators went into cruise control as they left no hope for a Racers comeback. In the quarter, a Rimdal three-pointer would give the Gators their largest lead of the game, 67-47.

Florida will travel on the road as they face off against the Mississippi Bulldogs on Dec. 30 on SEC Network.