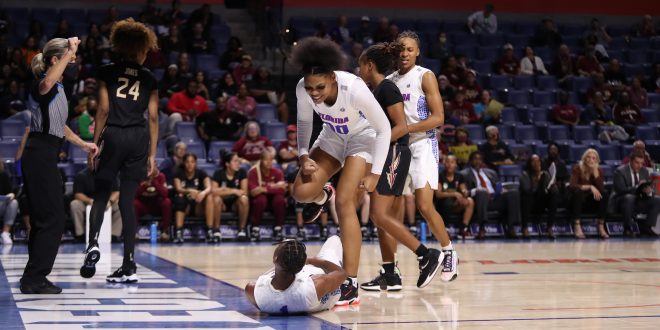 The Florida women’s basketball team rolls over in-state rival Florida State to end their five-game skid against the Seminoles at home. The Gators has now won eight of their last nine games after defeating FSU (6-3), 69-55, in the O’Connell Center on Sunday.

It was a dominant defensive performance for the Gators as they force 23 turnovers in the game. Also, the Seminoles offense was put on clamps throughout, which led to 18 points off turnovers for Florida. As a team, the Gators suffocating defense resulted in 10 steals, led by veteran point guard Kiara Smith with four.

For the game, Florida did a good job taking care of the ball, as they finished with only seven turnovers. It was clear from tip, coach Kelly Rae Finley and the Gators had their eyes set on Sunday’s matchup.

Leading the way for Florida was senior forward Emanuely de Oliveira who scored a career-high 16-points to add to her six rebounds. However, Oliviera’s offensive performance may have been overshadowed due to her efforts on defense. Finley was pleased with her team’s performance on that end of the court and she spoke about Olivera’s  career night.

“She’s the president of the charge club, though, she doesn’t really take them in practice, we wouldn’t want her to. Manu made some big time plays for us today and that’s something that she’s consistently done for us,” Finley continued. “She just has a steadiness and composure to her game and her basketball IQ is very high. We thought that that would be a mismatch and that four position both her and Jordan could expose, and it was nice to see them have some success tonight on the offensive end.”

Also scoring in double-figures for Florida was floor general Kiki Smith who contributed 11 points while Zippy Broughton added a huge 11 points off the bench.

Florida’s depth was too much for the Seminoles to handle early on. The Orange and Blue ended the first quarter on a 11-2 run to give the Gators a 19-11 lead heading into the second.

Sophomore Jordyn Merrit made her presence known off the bench scoring five points in the quarter. Also, coach Finley infused freshman forward Taliyah Wyche and her toughness and rebounding to counter the big bodies of the Seminoles. Wyche continues to give the Gators high energy as she ended the game with six points and three offensive rebounds in 18 huge minutes off the bench.

Florida’s bench scored 13 of their 19 first quarter points. Oliveira mentions the impact the bench had throughout their convincing victory over FSU.

In the second quarter, Finley and the Gators continued their defensive dominance as they extended their lead to as many as 15 points in the period. Broughton’s defensive pressure interrupted the rhythm of the Seminole guards including a steal which led to an easy layup for the senior guard during the period. Although averaging a tick under five points per game, Broughton headed into half with nine first-half points.

The defensive intensity continued to be on full display in the second half. Florida held FSU scoreless in the first three minutes as they went on a 9-0 run. Oliveira made a presence felt defensively and on offense not just with her scoring but with her unselfish play. With 7:26 left in the third quarter, junior guard LaVender Briggs converted on a layup from a nice dish by Oliveira.

Oliveira, the Brazilian native raves about her on-court chemistry with Briggs.

Florida outscored FSU 22-11 in the quarter as the Seminoles found themselves in a 60-35 deficit entering the final period. The Gators led as many as 27 points holding the opposition to a mere 3-14 from behind the arc.

For the game, Florida grabbed a total of 43 rebounds as they send the FSU home packing.

The Seminoles look to get back on track as they head back to Tallahassee to face Houston on December 16. For Finley and the Gators, they are still undefeated in the O’Dome as they will have a little nine-day hiatus as they get ready for Murray State. Tip off between Florida and the Racers is set for 1 p.m. Tuesday, December 21.