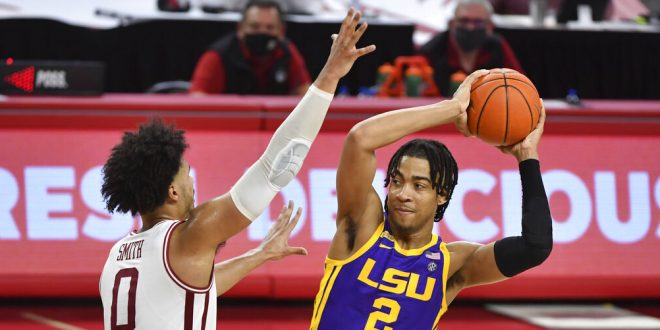 LSU forward Trendon Watford (2) tries to get past Arkansas forward Justin Smith (0) during the second half of an NCAA college basketball game in Fayetteville, Ark. Saturday, Feb. 27, 2021. (AP Photo/Michael Woods)

It’s official, conference play has begun for Men’s Basketball in the Southeastern Conference. As SEC play tipped off on Tuesday, the conference had five teams in the Top-25.

All Auburn From the Jump

The SEC’s highest-ranked team, the No. 9 Auburn Tigers (13-1), traveled to South Carolina to take on the Gamecocks on Tuesday.

The Tigers controlled the game from the start. After gaining a 15-point lead by halftime, the Tigers went into cruise control, winning the game 81-66.

It’s the 10th straight win for Auburn who will take on the Florida Gators on Saturday.

Battle in the Bayou

Two nationally ranked teams faced off in Baton Rouge, Louisiana. The No. 16 Kentucky Wildcats took a trip down to the Bayou to take on the No. 21 LSU Tigers.

LSU got a massive contribution off the bench from sophomore Tari Eason with 13 points.

For the Wildcats, senior Davion Mintz contributed 16-points off the bench.

In a 65-60 thriller, the LSU Tigers pulled off the upset to take down the Wildcats.

LSU’s next game will be Saturday against No. 18 Tennessee.

The SEC didn’t fail to excite on Day One. Texas A&M traveled to Athens to take on the Georgia Bulldogs.

The Aggies took a 14-point lead into halftime, but 21-points from sophomore Kario Oquendo put Georgia in the lead with five seconds left.

Texas A&M will take on Arkansas on Saturday at 1 p.m, while Georgia faces Kentucky at 6 p.m.

The Vanderbilt Commodores took a trip down to Fayetteville, Arkansas, to take on the Razorbacks.

Scotty Pippen Jr. led the way for Vanderbilt with 22-points in a nail-biting victory for the Commodores.

With five seconds on the clock, Arkansas drove down the court with a chance to win the game. Razorback guard Stanley Umude caught a pass from JD Notae, dribbled in the paint, and had his shot blocked and sent to the stands by Myles Stute.

The block helped secure the 75-74 win for Vanderbilt and moved them to 9-4 on the year.

The Commodores will host South Carolina on Saturday.

Tonight in the SEC

The SEC is back in action tonight.

Florida hosts No. 15 Alabama, Ole Miss travels to No. 18 Tennessee and Missouri takes on Mississippi State at home.

Chris Will is a second-year journalism student with a focus in sports and media. Originally from the Fort Lauderdale area, Will is now the beat reporter for Florida Gymnastics and covers all things sports in Gainesville.
@_Chris_Will_
Previous Crushing Defeat Leaves Florida Winless To Start Conference Play
Next Alabama faces tough road test against Florida