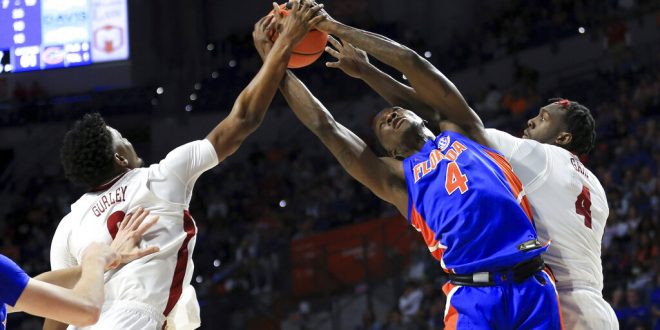 The SEC schedule has started for the Gators Men’s Basketball team and it’s off with a loss to No. 15 Alabama.

Florida started strong in the first half. They entered halftime with a lead of 39-36 over the Crimson Tide. Gators center Colin Castleton was the only player from either team to score in double figures in the first half. CJ Felder also had a good have with nine points on 100% shooting.

Gators head coach Mike White talked about the production and attitude of CJ Felder and the other bench players.

Other notable stat lines from the first half were Castleton with three offensive rebounds, and the Gators shooting 14 free throws in the half.

In the second half, things went poorly for the Gators from the start. Alabama held Florida to just three points in the first five minutes of the half. By eight minutes gone in the second half, Alabama had stretched their lead to 13 points.

Florida, with help from Myreon Jones’s 3-point shooting, were able to cut the deficit to nine points, 64-55, with 7:36 left in the game. The deficit at one point late in the game reached just six points, but Florida was unable to complete the comeback.

White talked about how the energy was missing for the second half.

The Gators now fall to 9-4 on the season and 0-1 in SEC play. They were supposed to play Ole Miss at the end of December to open the SEC schedule but the game was postponed.

Mike White talked about the physicality of the two teams, especially on the offensive rebounding of both programs.

One thing he wants to work on with the team going forward is learning to contain their emotion and not let small things affect them so heavily.

Florida continues a stretch of tough SEC matchups as they take on No. 9 Auburn followed by No. 21 LSU.

Jensen Young is a journalism student at the University of Florida. He works as a sports writer for WRUF.com and is the voice of trendings on Wednesday mornings on the WRUF radio station.
@Jensen_Young9
Previous Playoff committee set to meet Saturday in Indianapolis
Next Strus Returns To Play And Leads Heat To Victory Over Trail Blazers