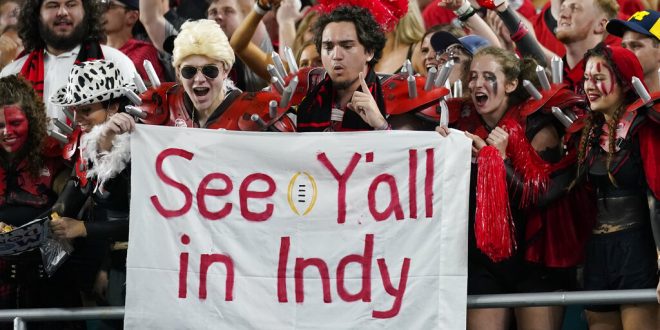 In preparation for Monday’s National Championship game, the leaders of the College Football Playoff are set to meet Saturday.

The #CFBPlayoff leaders are set to meet on Saturday to continue discussing playoff format expansion https://t.co/lNgbBPISAB

Discussions on expansion have resurfaced in wake of the 2021 playoff. On Friday, Michigan and Cincinnati fell victim to lopsided defeat in their semi-final games against Georgia and Alabama, respectively. With that, there will now be an All-SEC championship game for the second time in five years.

So, with yet another unbalanced slate of semi-finals, long-term cries for expansion are echoing around the sport. With the meeting set in Indianapolis, one is left to wonder if it’s a matter of “if”, not “when”, the tournament is expanded.

Sunday’s meeting will see the upper-echelon of FBS brass in one room.

According to ESPN’s Heather Dinich, all 10 conferences competing in the FBS will have its commissioner present along with Notre Dame athletic director Jack Swarbrick. Here, the leaders will discuss a multitude of topics, including expansion. This comes after various voices around the sport have expressed a desire to expand.

“I think college football is better served by having a broader participation in national championship games, but the fact is, you’ve got to go beat those people,” he said.

Nick Saban asked if CFP expansion could help avoid semifinal blowouts: "If this is the best four teams and they played each other, I don’t see the logic that if we had more teams, they would be better games. I don’t see how that adds up."

Conversely, AAC commissioner Mike Aresco feels the opposite. Markedly, he told ESPN if more teams are given the opportunity, perhaps said programs will rise to the occasion.

Since the playoff’s inception in the 2014 season, there have been twelve games decided by 20 points or more. For reference, there have only been 16 games in CFP history.

Fixing the postseason format has been a debate for years now, even predating the current format. But, in this current era of college football, the time may be right to change the system. Historically, the committee has discussed anywhere from an eight-to-twelve-team tournament.

With an eight-team tournament, it’s fair to assume there would be six automatic qualifiers (five ‘Power 5’ conference champions plus a ‘Group of Five’ representative). That would leave two spots open for ‘at-large’ bids (i.e. Georgia in 2021).

This Rose Bowl would’ve been a first round game in a 12-Team CFP. We want expansion

For a twelve team system, the same automatic qualifiers remain. However, there would be more at large bids. This would give greater opportunity to schools such as Notre Dame.

Sunday’s meeting could be a crucial step in amending the college football postseason. However, be warned, there has been many of these meetings in the past and nothing has come of it, yet. Maybe Saturday is a step in the right direction.

Alabama takes on Georgia in the National Championship Monday at 8 p.m. from Lucas Oil Stadium in Indianapolis.

Sam Petosa is a Journalism major pursuing a Specialization in Sports and Media at UF. The South Florida native produces daily shows for WRUF, including "Sport Scene with Steve Russell, and "The Tailgate." In addition, Sam provides weekly sports updates for WUFT News and radio Sportscenter's for WRUF radio. Sam has been a writer at ESPN Gainesville since January 2020.
@sampetosa5
Previous Kyrie Irving Set to Make Season Debut
Next Gators fall short to Alabama 83-70