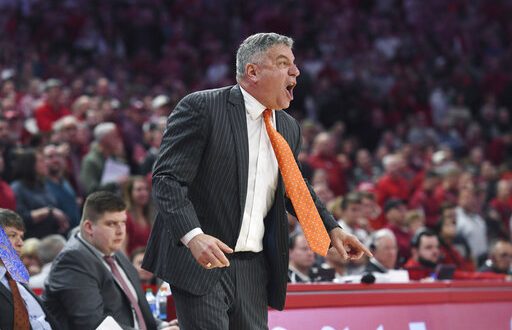 Auburn coach Bruce Pearl reacts on the sideline during the second half of the team's NCAA college basketball game against Arkansas on Tuesday, Feb. 4, 2020, in Fayetteville, Ark. (AP Photo/Michael Woods)

The Tigers took no time to jump on the Bulldogs. Walker Kessler, one of the nation’s top players, paced No. 2 Auburn with 15 points and six blocks on the night. In front of a packed gym, the Tigers were able to get off to such a strong start thanks to the 3-point line and transition points. Auburn was able to force 18 turnovers on the night and even attempted 22 more shots than the opposition.

Auburn held all the momentum going into the half, ending on a 16-2 run. K.D. Johnson knocked down one of his three 3-pointers on the night in the midst of that run to get the whole arena on their feet.

Georgia continued to fight in the second half, but their first-half deficit was deemed to be too much. The Bulldogs were led by Christian Wright who had 16 points and four rebounds on the night. With Auburn’s suffocating defense, it was tough for Georgia to get into any sort of offensive rhythm throughout the night.

Auburn’s 52-point first half is the most they have scored in a half since they hung 54 in the second half against Nebraska back in early December. Additionally, the Tigers are the last team undefeated in conference play in the Southeastern Conference and are one of the hottest teams in the country with their best national ranking in two decades.

Auburn looks to extend their nation-best 14-game win streak Sunday at home for a top 15 matchup against No. 12 Kentucky.

After their biggest defeat on the season, Georgia will attempt to get back in the win column Sunday at South Carolina.

A third-year journalism student with a focus in sports and media.
@kylecurtisss
Previous No. 2 Auburn Host Georgia Basketball
Next Alabama takes advantage of LSU injuries and wins 70-67