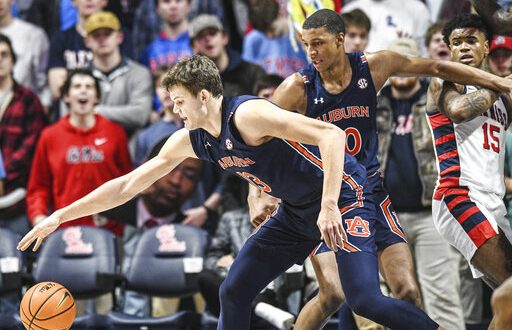 The No. 2 ranked Auburn Tigers host the Georgia Bulldogs tonight at 9 p.m.

The teams are headed in opposite directions. Auburn is undefeated in the SEC and holds a record of 16-1. Georgia has yet to win an SEC game and has lost its last six games.

Auburn has won 13 straight games. Their only loss came in double overtime to the UConn Huskies. Since then, the Tigers have breezed through their opponents winning by an average of 15 points.

The Tigers are led by freshman Jabari Smith. Smith was ranked No. 6 in the class of 2022 by ESPN – the highest-rated recruit in Auburn history. So far, he has lived up to the hype. The 6-foot-10-inch forward is averaging just over 16 points and six rebounds a game. He is poised to be one of the first picks in the 2022 NBA draft.

The @AuburnMBB superstar PTPER JABARI SMITH @jabarismithll is showing tonight vs @AlabamaMBB y he is the lock to be the # 1 pick in the 2022 @NBA draft .

Auburn is a complete team with three other players averaging at least 10 points a game.

The Tigers also get after it on the defensive end. Four players average at least one steal, while Smith and sophomore forward Walker Kessler average no less than a block a game.

Kessler does a little bit of everything for the Tigers. He’s averaging 10 points, 7.5 rebounds and four blocks this season.

Look at what he did in Auburn’s last game:

Auburn is favored by 21 points tonight.

The Georgia Bulldogs have a record of 5-12 this season. Their biggest win thus far was over the then No. 18 ranked Memphis Tigers. Memphis is no longer ranked.

Georgia holds the worst record in the SEC. The Bulldogs lost their first SEC game to Texas A&M at the buzzer.

Georgia took its first lead with 5 seconds remaining, then lose on this shot. pic.twitter.com/vceObexxS4

Since then, the Bulldogs have lost three straight games. They were blown out by both Kentucky and Mississippi State and lost to Vanderbilt by seven.

Georgia is led by sophomore guard Kario Oquendo who is averaging 13 points and four rebounds.

Like Auburn, Georgia has four players averaging double-digit points per game. However, the team is not as good defensively. Georgia is averaging just under three blocks a game to go along with five steals. Auburn averages eight blocks a game and just under 10 steals.

Ball security is also an issue for the Bulldogs. The team turns the ball over about 14 times a game. Senior guard Aaron Cook averages over three.

A Georgia win tonight would be an upset, but it could rejuvenate their season.

Trey is a third year sports media major at the University of Florida, and a WRUF reporter.
@@treyboogie5
Previous Kentucky Heads to College Station for Test Against Texas A&M
Next Auburn Steams Through Georgia