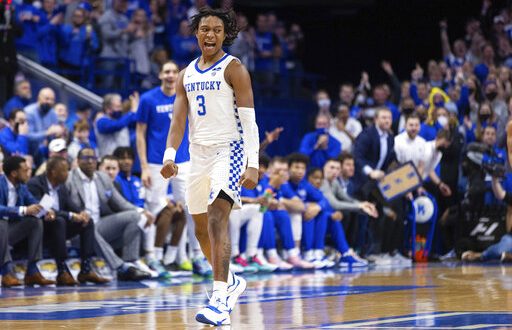 Despite tying their lowest shooting percentage of the season, Wednesday’s game against Texas A&M resulted in a Kentucky comeback win.

How did Kentucky comeback?

Texas A&M shot a much better 50% from the field in the first half, but still made just one three-pointer. Henry Coleman III led the way for the Aggies in the first half with nine points on 4-5 shooting and four rebounds.

Both teams shot under 40% for the game. Kentucky head coach John Calipari spoke about how the team was able to overcome their struggles. “A couple guys did not play well,” he said, “That’s okay, you’re not machines, you’re not robots. Other guys stepped in and played well.”

This win means Kentucky extends their win streak to four games and Texas A&M’s streak of eight games is snapped.

Texas A&M’s arena was filled with fans Wednesday. There were a record 14,036 people in attendance for this SEC battle.

Next, the Aggies will play Arkansas on Saturday while Kentucky will take on No. 2 Auburn.

Jensen Young is a journalism student at the University of Florida. He works as a sports writer for WRUF.com and is the voice of trendings on Wednesday mornings on the WRUF radio station.
@Jensen_Young9
Previous Gator Hoops: The Week Ahead (Jan 20th)
Next Huge Fourth Quarter Helps Heat Defeat Blazers