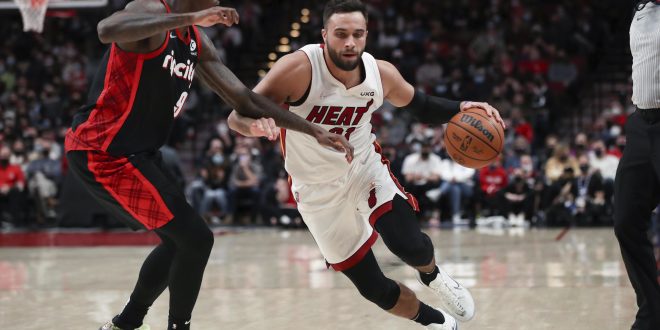 With Tyler Herro in health and safety protocols, Kyle Lowry out for personal reasons and Jimmy Butler ejected before halftime, this game had to of been a wash for the Miami Heat, right?

A huge performance from the Miami Heat bench helped the Heat get the win on Wednesday over the Portland Trailblazers.

Not a Breeze By Any Means

The Trailblazers (18-25) have struggled this season without their star, Damian Lillard, who is out for about six-to-eight weeks.

That being said, Portland got off to a strong start in South Beach. The Blazers put up 26 points in the first quarter and had a three-point lead.

An offensive explosion saw both teams score 30-or-more points in the second quarter. Miami pushed to a two-point lead going to the half.

Without Lillard, it was Anfernee Simons who led the offense for the Trailblazers.

The 22-year-old led both teams in scoring with 27 in the game.

Even with the comeback and eventual lead for the Heat, momentum seemed to be on the side of the Trailblazers. With just over two minutes left in the half, Jimmy Butler drove to the basket and was fouled on his way into the lane.

Butler got into the face of the official on the baseline and was quickly given a technical foul. After his conversation with the referee, another official came in and threw Butler out of the game.

Butler’s night was over after just 15 minutes and four points.

The Trailblazers used the advantage and came out with stellar defense to start the second half. After keeping the Heat to just 20 points for the quarter, Portland was up two going into the last 12 minutes of play.

Bam and the Bench

Going into the fourth quarter down, the Heat mounted a huge push to finish the game. Not only keeping the Blazers to only 12 points in the quarter but also scoring 26.

But it was the bench that really sealed the deal.

The Miami bench outscored the starters 58-46.

With 26 points from Caleb Martin, the Heat finished the game with a 104-92 victory.

Looking Ahead at the Heat and Trailblazers

Next up for the Miami Heat, they will take on the Atlanta Hawks on Friday for the third time since Jan. 12.

The Portland Trailblazers travel to Boston to play the Celtics on Friday.

Chris Will is a second-year journalism student with a focus in sports and media. Originally from the Fort Lauderdale area, Will is now the beat reporter for Florida Gymnastics and covers all things sports in Gainesville.
@_Chris_Will_
Previous Jacob Toppin leads Kentucky comeback win over Texas A&M
Next Castleton Injury Lingers Over Gators Win