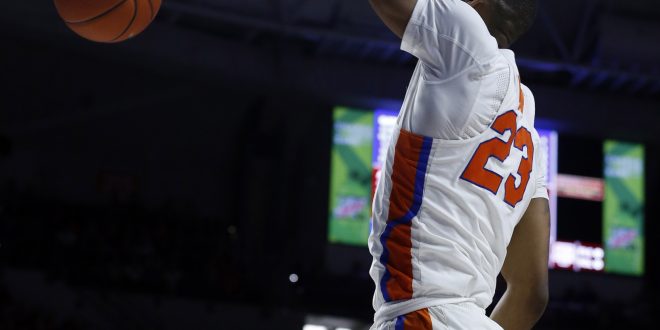 The Florida Gators Men’s Basketball Team is on a hot streak with three straight wins in conference play. The Gators look to add to their win streak when they travel to Oxford on Monday to face off with the Ole Miss Rebels.

Monday’s SEC matchup against Ole Miss is a rescheduled meeting that was originally scheduled for December 29, but was postponed due to issues with COVID in the Florida basketball program.

Sandwiched in between two SEC games, the Ole Miss game will make Florida’s seventh straight SEC matchup. The Gators have slowly began to redeem themselves after dropping to 0-3 in SEC play for the first time in 40 years following the January 12 loss to LSU. The 58-64 loss to the Tigers was met by a quick turnaround from the Gators who then went on to win the next three games, all of which were in conference matchups. The Gators now stand at 3-3 in SEC play.

The new arrangement on the Gators’ schedule also places them in a predicament where they will be playing four games in a weeks span.

The Gators’ four-game run began with the dominant showcase over Vanderbilt on January 22. The matchup is succeeded by Monday’s Ole Miss game, followed by a road game to Tennessee on Wednesday. Finally, the Gators will conclude the week with the SEC/BIG 12 Challenge against Oklahoma State at home on Saturday.

The Gators’ will look to maintain their current win streak without forward Colin Castleton. The senior has missed the last two games due to a shoulder injury that head coach Mike White described as “significant.” Castleton currently leads the team in scoring, rebounds and blocks.

In the wake of Castleton’s injury, Jason Jitoboh been the next man up. The junior’s playing time has increased, and he has made the most of it. In the Gators’ win against Mississippi State Wednesday, Jitoboh had a career high scoring eight points in the final nine minutes to helped the Gators clench the comeback.

Ole Miss is coming into the game on a four-game losing streak. The teams most recent loss was a 78-60 final against Mississippi State on Saturday.

The Rebels will also be without a key player. Leading scorer, senior transfer Jarkel Joineris out with a knee injury he suffered earlier this month. Joiner is projected to miss the next six weeks of the season.

One of the key difference makers for the Rebels will be center Nysier Brooks. The seven-foot Miami transfer currently leads the team in field goals made and is averaging 8.1 rebounds.

Sophomore guard Matthew Murrell has been a problem from the arc. He currently leads the team in three points made, making 30 of his 75 attempts.

The two teams will meet again soon after the matchup on Monday. The Gators and Rebels are slated to face off against one another again on February 5 in Gainesville.

Tip-off for Monday nights matchup is set for 7 p.m. in Oxford, Miss.