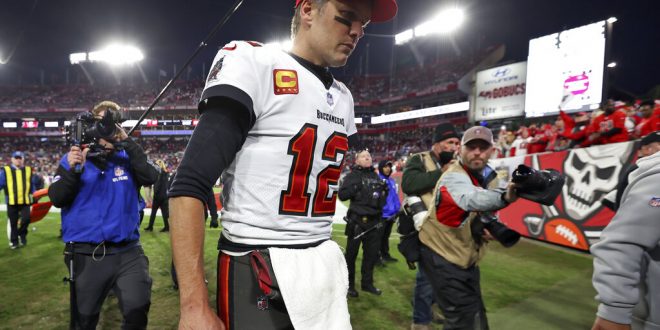 Trailing 27-13 late in the fourth quarter, Leonard Fournette scrambled to the end zone on fourth-and-one with 1:43 on the clock to tie the game. However, Matthew Stafford launched a 44-yard pass to Cooper Kupp to set up kicker Matt Gay for the game-winning field goal.

A Day To Day Decision

During the postgame press conference, there seemed to be one question that reporters were constantly asking Tom Brady. Are you coming back for another season?

“I haven’t put a lot of thought into it,” Brady responded. “We will just take it day-by-day and see where we are at.”

“You’ve won seven (Super Bowls) and you’ve played in 10,” Johnson began. “You’ve accomplished every hardware you could think of in terms of professional sports.”

Brady has played 22 seasons in the NFL, winning six of nine Super Bowls with the Patriots and one with the Buccaneers.

Keyshawn also mentioned that there’s something to be said for family, and time with your family.

“He has kids and they’re getting older,” Johnson said. “I’m sure his son wants to play football or wants to play quarterback or something along those lines, and duplicate that success or try to duplicate the success that his dad had.”

Whether you believe Brady or not, you have to excuse him for not wanting to talk about retirement after an abrupt end to Tampa Bay’s season.