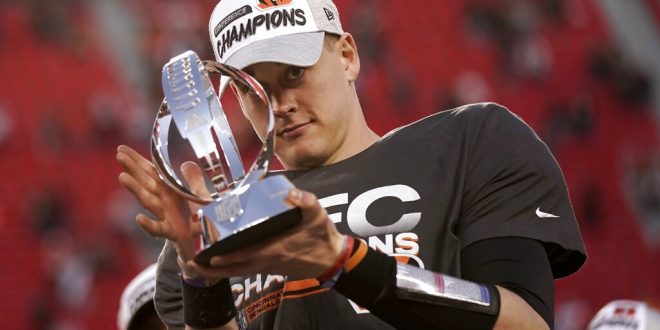 The Cincinnati Bengals fought back from an 18-point deficit to take down the Kansas City Chiefs in the AFC Championship game. The Bengals are now heading to the Super Bowl following Sunday’s overtime duel.

The Chiefs saw a second consecutive overtime game but couldn’t find a way to win this time. Evan McPherson was yet again the hero for Cincinnati and split the uprights on his game-winning field goal attempt.

How the Game Played Out

The AFC Championship game started off looking like the Chiefs were looking at an easy victory and another trip to the Super Bowl. The team scored touchdowns on its first three drives and got out to an early 21-3 lead.

However, right before halftime, the Bengals gained some crucial momentum. With just over a minute left in the half, Joe Burrow found Samaje Perine for a 41-yard touchdown on a screen. This gave the Chiefs enough time to get all the way down the field. Cincinnati came up with a big goal line stand and kept Kansas City from adding to the score. Burrow and the offense recognized how important this stop was in keeping them in the game.

The 21-10 deficit was much more manageable than a three-score game would have been. The teams seemed to switch roles in the second half with the away team becoming the aggressor and the Chiefs looking lost on offense.

A McPherson field goal made the match a one-possession game. On their next drive, Burrow found All-Pro receiver Ja’Marr Chase for the touchdown and Trent Taylor for the two-point conversion. This tied the game up, and the Bengals had all the momentum in Arrowhead.

Each team was able to score one more field goal, and the game was heading to overtime. For the second week in a row, the Chiefs won the coin toss, and everyone thought the game was over. This was until Patrick Mahomes threw his second interception of the game and Vonn Bell returned it just short of midfield. Bell knew the quarterback would look for one of his star players, and he came up with the ball.

The Bengals’ offense drove all the way to the Chiefs’ 13-yard line and gave McPherson the chance to bring home the win. He easily made the field goal and sent Cincinnati to the Super Bowl.

McPherson, the former Gator, has proved himself not only as one of the best players in Cincinnati, but one of the best kickers in the league. He made all four of his field goal attempts yesterday and is 12/12 in the playoffs. He now has two walk-off field goals in the postseason and five on the year.

Burrow made big play after big play when his team needed it the most. He finished the game with 250 yards and two touchdowns, while adding 25 yards on the ground. Head coach Zac Taylor said he can count on Burrow to do what it takes to win the game.

His receivers were playing great, namely Chase and Tee Higgins. Chase’s touchdown helped tie the game, and he ended the day with six catches for 54 yards and a touchdown. Higgins was continuously making plays, including a 44-yard reception at the beginning of the third quarter. He finished with six catches for 103 yards.

The Bengals’ defense was also huge in the victory and managed to slow down Mahomes and the Chiefs’ prolific offense. Bell and B.J. Hill each had interceptions leading to touchdowns for Cincinnati. The away team’s pass rush brought down Mahomes four times, including two sacks for Sam Hubbard and 1.5 sacks for Trey Hendrickson.

What This Win Means for Cincinnati

The Bengals haven’t made it to the Super Bowl since 1988 and have never won the game. Coach Taylor knows the fans have been waiting for this moment and wants to deliver them the victory.

Burrow has led his team to the Super Bowl in just his second season in the NFL.

As for their opponent in the big game, they will be playing the Los Angeles Rams on Feb. 13. The Rams have a high powered offense accompanied by a stout defense and get to play in their home stadium. The job won’t be easy, but if there’s one team that can upset them, it’s the Bengals who thrive as underdogs.

THE STAGE IS SET. pic.twitter.com/4oae2og0So

Previous Gainesville falls short to The Rock despite grit
Next Will San Francisco’s Jimmy Garoppolo Play In 49ers Jersey Again?