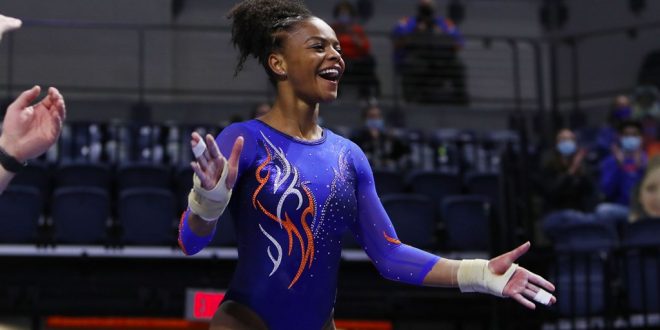 It was a wild one in Columbia, Missouri as the number four Florida Gators traveled to take on the No. 11 Missouri Tigers in an SEC gymnastics meet.  It all came down to the final rotation where the Gators kept their winning ways going and walked away with a 197.775-197.650 win over the Missouri Tigers.

Friday Night Heights kicked off with Florida on the bars and Missouri on the vault.  Trinity Thomas set the bar early for the Gators. She kicked off her first all-around competition of the season with a 9.925 on the uneven bars. Leanne Wong got a 10.0 on the bars last week. She followed up her perfect performance with a stellar 9.950.

Florida finished the rotation with a 49.500 in their first rotation.

With five underclassmen in the vault lineup, including three freshmen, the Tigers kept it close on the first event. Every score on the vault was above 9.800 for Missouri. Amari Celestine led the way with a 9.925 to take the vault title for the meet.

The Tigers trailed by 0.250 after the first rotation.

Every single score from both teams on bars were above 9.800.

Mizzou finished off their rotation with gymnasts scoring career-highs, including Jocelyn Moore who put up a 9.850. Sienna Schreiber led the Tigers with a 9.900.

Savannah Schoenherr and Thomas put up the highest scores for Florida, but a late substitution took Payton Richards out of the lineup and saw Sloane Blakely take her place as the anchor, where she scored a 9.675. The low score forced the Gators to count a 9.725 from Chloi Clark.

The back half of the meet didn’t fail to excite.  Florida moved to the floor exercise and Missouri got on the balance beam.

The number three ranked team on beam continued to show why they are one of the best in the country. Both Sydney Schaffer and Schreiber got 9.925 and gave the Tigers a 49.425 on the event.

The Gators were put in a tough situation after Richards, their second gymnast to compete on the floor, was supposed to finish her final pass with a front tuck but didn’t get enough of a push to complete the move before catching herself with her hands. Richards was given a 9.000, meaning the Gators needed to hit every other routine to stay ahead.

Wong and Thomas continued to excel and both scored 9.950 on the apparatus. It was a new career-high for Wong.

Clark closed out the rotation with a close call on her first pass. She appeared to have her toes slightly out of bounds, although the judges did not raise the flag to indicate she did. She received a 9.825, meaning the 9.000 was dropped and the Gators kept a lead.

Gator Put it Away

Down by just 0.100 points going into the final rotation, the Tigers were in a prime position to pull off the upset.

Missouri put on a great performance on the floor with four of their five scores above 9.900. They put together two 9.950 routines with Hannah McCrary and Celestine. The Tigers scored a program-high 197.650 for the meet.

A major mistake would be needed for the Gators to lose the meet and on the balance beam, anything is possible.  However, the Gators maintained their consistency on the event. Led by Thomas, the top gymnast in the country on the beam, the Gators had a near-perfect 9.975 on their score sheet.

Leah Clapper closed out Florida’s night needing a 9.850 to secure the win for the Gators. After a small balance check and a slight step on the landing, the senior got a 9.900 and kept the Gators undefeated on the season.

In her first all-around competition of the season, Thomas got the third-highest all-around score in the country this season. She won the all-around with a 39.750.  Celestine took the vault title after getting a 9.925, while Wong beat out the competition on bars with a 9.950.

There was a four-way tie on floor exercise. Thomas, Wong, Celestine and McCrary all received 9.950.

The Gators will head back home and host the number eight LSU Tigers on Friday, and Missouri will travel to Auburn to take on Sunisa Lee and the Tigers.

Chris Will is a second-year journalism student with a focus in sports and media. Originally from the Fort Lauderdale area, Will is now the beat reporter for Florida Gymnastics and covers all things sports in Gainesville.
@_Chris_Will_
Previous Gators Women’s Hoops Darkhorse in the SEC?
Next Columbia Lady Tigers Eliminated from Districts Following Physical Championship Game