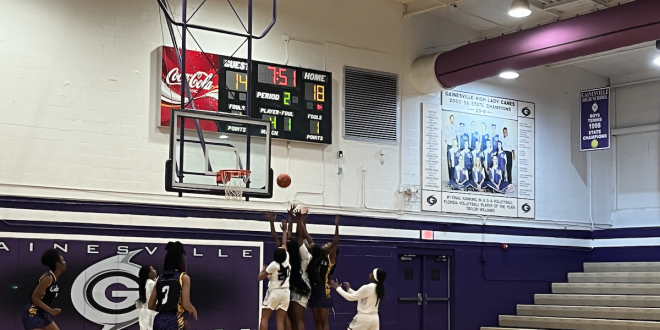 The Columbia Tigers came up short against the Gainesville Hurricanes in the 6A District 3 Championship on Friday night. The Tigers kept it competitive, but the Hurricanes overpowered them in the 70-62 loss. Hurricanes junior Leyah Houston’s 25-point outing played a big role in her team’s victory. Tigers senior Na’Haviya Paxton also put forth an excellent performance despite Columbia’s loss, racking up 29 points.

Aggressive Play on Both Sides

Both teams played extremely physical from the opening tipoff to the final buzzer. The Tigers and Hurricanes each surpassed 20 fouls each by the beginning of the fourth quarter. Additionally, three players had fouled out by the end of the game. Freshman Joleana Gardner and senior Keturah Taylor fouled out for the Tigers. Sophomore Jocelyn Wallace fouled out for the Hurricanes.

And there it is. Both teams have combined for over 40 fouls tonight. pic.twitter.com/4DHF4bHsse

As a result of the plethora of fouls called, free throws became a key source of offense as the game went on. In the second quarter, all but two of Columbia’s points came from the free-throw line. Additionally, Paxton (who is committed to continuing her basketball career at Florida Southern College next fall) went to the line on eight separate occasions. She converted on 9 of her 16 free throws.

“I knew I just had to play harder… [to] earn my respect on the court,” Paxton said. “I had to earn the calls I wanted.”

Paxton was not the only player who had to fight for their scoring opportunities tonight. 22 of the Tigers total points came from the charity stripe on Friday. Fellow Columbia seniors Annzarria Jerkins and Camille Perry found most of their scoring opportunities at the line as well. Jerkins and Perry each chipped in with five made free throws; Jerkins finished with nine points, while Perry finished with 14 points.

While a large portion of Columbia’s fouls came from their physical style of play, the Tigers felt irritated with some of the calls from the officials. One prime example came in the second quarter when a technical foul was called on Tigers junior Zimora Owens. During the stoppage of play, several Columbia fans, parents and even players voiced their displeasure with the call.

Tigers fans and players were upset at a technical foul issued to junior Zimora Owens. Something to keep an eye on in a game where both teams have combined for 15 fouls before halftime. The Tigers trail 20-29 with 4:33 to go in the second quarter. pic.twitter.com/BrkwLdmtLN

Columbia’s frustration came to a boiling point during the third quarter. While Jerkins was driving to the basket, she appeared to be hit in the face by a Columbia defender. She lost her balance and fell, forcing the ball to roll out of bounds. The Tigers believed that a foul had been called, but the officials determined that Jerkins had turned the ball over herself. As a result, they ruled that it was Hurricanes ball.

Columbia head coach Anthony Perry spoke with the referees on multiple occasions during the game to plead his case with some of the calls against his players. At the end of the night, he acknowledged his disappointment with the results of the game.

“Whenever we come to Gainesville, it’s as bad or worse on the calls [as this] every single time we play here,” Perry said. “I’m not whining, I’m not crying. I take wins, I take losses. But my girls cannot play against the refs in a hostile environment.”

Perry also called out the missed foul on Jerkins that resulted in a turnover, detailing his exchange with the officials after the play.

“[Jerkins] got an arm across her neck… and the ref tells me, ‘I missed it,'” Perry said. “There’s three refs out there. This is a tournament game. That’s horrible.”

End of the Road

Finishing their season with a loss in such a hard-fought game is a tough pill to swallow for Columbia. However, they have shown massive improvement throughout a season with plenty of bright spots. The Lady Tigers can walk away knowing they left everything they had on the court.

“We didn’t get the results we wanted, but we played hard,” Paxton said. “I’m so proud of all my girls.”

Jack Meyer is a second-year student at the University of Florida. He is majoring in Journalism and specializing in Sports and Media.
@jackmeyerespn
Previous Florida’s Trinity Thomas Wins All-Around as Gators Defeat Missouri in Gymnastics
Next Gators Men’s Basketball Escape with another Win as they Defeat Ole Miss in OT