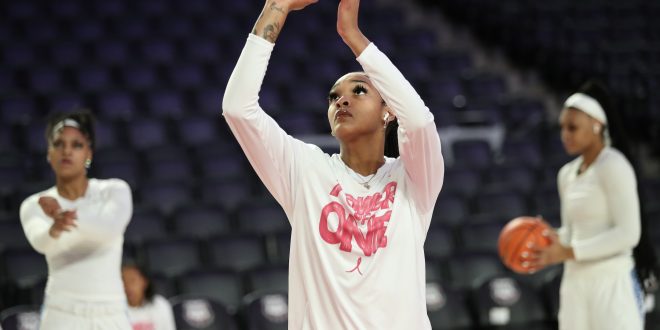 Florida Gators Women's Basketball sophomore Jordyn Merritt warming up before a game against #14 Georgia on Feb. 10. (via @GatorsWBK on Twitter)

Jordyn Merritt and the Florida women’s basketball team found a way to win a road match up against nationally ranked Georgia.  The Gators won by a margin of 54-51 as each team has now won on the other’s home floor this season.

Looking ahead for the Gators, the only remaining ranked opponent for the regular season is LSU, currently number 15.

How Jordyn Merritt and the Gators pulled off the upset

The first quarter was a slow 10 minutes offensively. Neither team made a three-point shot and there were a combined five turnovers. The two teams went into the second quarter 9-8 with Florida having the one-point advantage.

Georgia shined in the third quarter, outscoring the Gators by eight points to enter the fourth quarter up 42-38 but the Gators were able to finish out the game with a three-point victory despite turning the ball over 20 times.

Sophomore Jordyn Merritt finished with 11 points and was just one rebound away from a double-double. That would have been just her second double-double of the season.  The Gators got over 27% of their points from the free-throw line, making 15 of 17 attempts.

Looking ahead, the Gators could see a jump into the AP Top 25. They were already receiving votes, and with a Top 25 victory, they have a chance to make it in.

The Gators will continue their road stretch against Mississippi State on Thursday, February 10.

Jensen Young is a journalism student at the University of Florida. He works as a sports writer for WRUF.com and is the voice of trendings on Wednesday mornings on the WRUF radio station.
@Jensen_Young9
Previous Newberry Boys’ Basketball Dedicates Season to Fallen Teammate
Next National Signing Day for Gainesville Hurricanes