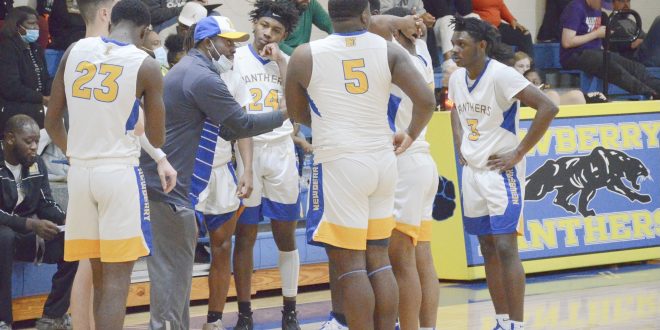 “I remember the day Mahki first walked into the gym,” Newberry boys basketball head coach Patrick Green recalled as he eluded back to his first encounter with Mahki Bostic.

“Kid was ultra-athletic, could run like a deer, yes sir, no sir type of player, type of kid in general…just all around lovable guy who connected with his teammates right away.”

The Newberry boys’ basketball team has had an incredible season thus far. The team finished off the regular season with an 18-5 record and will enter the district playoffs as the top-seeded team. Every team that currently remains has its own motivations for winning. But for this Newberry team, the meaning behind this season is much deeper.

Mahki Bostic played two seasons for Newberry High School after transferring over from Bronson High School. As the 2021 school year began to come around, Bostic was focused on the typical things that a high school senior was concerned about: applying to colleges, finishing up high school and preparing to serve as a leader on his school’s basketball team. He was set to become a key component of a team absolutely stacked with senior leadership.

On August 2, just a few days before the start of the school year, Bostic died in a tragic car accident. He was only 18 years old. Someone who was set to hold such a large role on a state-championship contending team was no longer physically present. While Bostic was and remains missed to this day, the Newberry Panthers chose to honor his memory by dedicating this season to their fallen teammate.

A Nucleus is Assembled

After a freshman season in which he averaged 4.3 points per game, Mahki Bostic transferred from Bronson High School to Newberry High School. Coincidentally, Patrick Green was hired as the head coach of the boys’ basketball team at the same time.

Perrion Sylvester and Michael Moore, two players with significant roles on this year’s team, played their first year of varsity basketball with Mahki.

While neither saw a significant amount of minutes during the 2019-2020 season, Bostic averaged 12.2 points per game in an injury-shortened five-game season.

As the school year continued on, Bostic drew more of an impression on his teammates, both on and off the court. Sylvester and Green are among many individuals that have praised Bostic’s effort in his style of play.

“Between drills and plays in the game he never gave up,“ Sylvester said of his former teammate. “He just always stayed motivated and went 110%.”

Even outside of basketball, Bostic was loved by countless people within the community. Moore and Bostic were a part of the same friend group and often played pickup games together.

“We hung out outside of school and we were cool,” Moore said. “I personally saw him like a big bro, since he was older than me.”

The team finished 12-14, losing to Williston High School in the second round of the district playoffs. Although this was the end of this season, a young nucleus had been assembled that brought forth plenty of promise for a successful future.

In the season that followed, the newly-assembled nucleus took the next step in terms of player and team development. This was a core group that had ambitions of district and state championships in mind.

“It was electric, man,” Sylvester said of his on-the-court relationship with Bostic. “Every time we stepped on the court, we knew we were gonna dominate.”

While the 5-foot-10-inch guard wasn’t as big a contributor when it came to scoring, his presence was certainly felt in all other statistical categories and through his effort.

“He didn’t always score all of the points, but there were certain games where Mahki would be all over the stat book,” Green said while describing Bostic’s style of play. “He was that type of guy that just gave you a lot of energy.”

The Newberry boys basketball team finished the season with a 14-9 record and a second-consecutive exit in the second round of the district playoffs. Even after a year in which the team improved in so many different ways, the Panthers had come up short yet again. However, with nine seniors set to lead the team in the following year, Newberry knew that they had something to prove going into the 2021-2022 season.

On August 2, during a teacher-work day, Green’s phone rang. Someone asked him whether Mahki had been in an accident. Green said that he hadn’t heard anything and hoped that this claim was false. After reaching out to more people within the community, the news that many had feared was confirmed as true.

“It hit me hard, and I was confused as to why it happened,” Sylvester thought when he first heard the news of Bostic’s passing. “Things happen for a reason and it was a crazy, crazy day.”

Although he had reached out to players privately, Green never had a chance to address his team following the tragedy, since the accident had occurred a few months prior to the start of the season. Even though the Panthers were in the midst of the offseason, the team came together and utilized various methods to heal.

“We kinda just came together with people that we knew and we did small stuff, did a memorial service for him, and supported his mom,” Moore mentioned when discussing the healing process.

“That helped me for a little bit, just knowing that his mom is good.”

Although Mahki Bostic was no longer physically present, the Newberry Panthers wanted to ensure that his name and his spirit wouldn’t be forgotten. Coach Green has only dressed 14 players for games this season, with one spot being left for Mahki Bostic. During the season, his name would often appear in the scorebook for games. Before Bostic passed away, he got a tattoo on his 18th birthday that read “Dream Chasers”. The team decided to honor him by placing this message on the sleeves of their shooting shirts.

“Every time we were on the court, we would think of what ‘Ki’ would say or do,” Sylvester said while discussing how the team hoped to honor Bostic. “And we would just keep it going everyday in practice and in games.”

Towards the end of a game at home against Chiefland High School, the Panthers chose to honor their late teammate. Rather than huddling during a timeout, Green and his team gathered at center court while holding up Bostic’s number three jersey.

After a dominating regular season, the Newberry Panthers are heading into the district playoffs as the top-ranked seed in 1A District 7. Although the team posted an 18-5 record in honor of Bostic, this senior class and this team are hungry for more.

“Take it one game at a time…one practice at a time,” Moore said when discussing what’s next for the Newberry Panthers. ”Work on the small things and we’ll get there.”

The Newberry Panthers will continue to honor Bostic as they begin their playoff journey in the district playoffs on Tuesday, February 8 at 5:30 p.m. The team will play against the winner of Bronson High School versus Chiefland High School. That game is scheduled to tip-off on Monday evening at 7 p.m.