These players significantly contributed to the success of the Hurricanes this season. The team finished with an 8-3 overall record and went 4-0 in district games – an outstanding improvement from last season’s 2-4 record. Before Bowden and Tisher signed their name on the line, Head Coach Dock Pollard and GHS principal Diane Leinenbach gave speeches commending the student-athletes.

Head Coach Dock Pollar delivered a speech at the signing.

Principal Diane Leinenbach also gave a speech while the athletes signed their letters.

Brandon Bowden was a vital part of the Hurricanes defense this year. Mainly stationed on the defensive line and defensive end, Bowden used his 6’2, 220-pound frame to effortlessly carve through offensive lines. Bowden had an impressive senior season, recording 44 solo tackles, 11 assisted tackles and 14 tackles for loss. Further, Bowden’s work on the gridiron caught the eye of the Gainesville Sun, who selected Bowden to the First Team All-Area Defense Team.

Bowden signed his letter of intent to the University of Mount Union, located in Alliance, Ohio. The Purple Raiders are a Division III program that are members of the Ohio Athletic Conference.  Bowden claimed he chose to attend Mt. Union because it is close to extended family in Michigan.

Also, Bowden said, “they have a winning tradition that I’m looking forward to being a part of.”

Special teams punter/kicker Andrew Tisher signed his letter of intent to Stetson University in Deland, Fla. The Hatters are a Division I program and are members of the Pioneer Football League. Tisher, who is listed at 6’0, 155-pounds, put up impressive numbers throughout high school. Unfortunately, an injury kept Tisher sidelined for most of his senior season. Despite the lack of field time this fall, Stetson had their eye on Tisher for a while and still offered him to join their squad. According to National Kicking Rankings, Tisher is a four-star punter and ranks as the nation’s 53rd best punter in the class of 2022.

Tisher said he joined Stetson because “their coaching staff made it very clear early on that I was important to them.”

Also, Tisher grew a connection with Stetson throughout this past fall, attending many games and spending time with players and staff.

“I felt welcomed as soon as I stepped on campus and knew that was the place I wanted to be,” Tisher said.

Sports Journalism student at the University of Florida.
Previous Jordyn Merritt, Gators Women’s Basketball Win Nail Biter Against No. 14 Georgia
Next Magic Blown Out By Celtics at Home 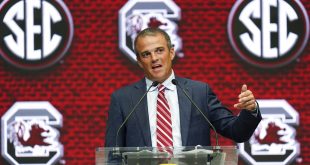