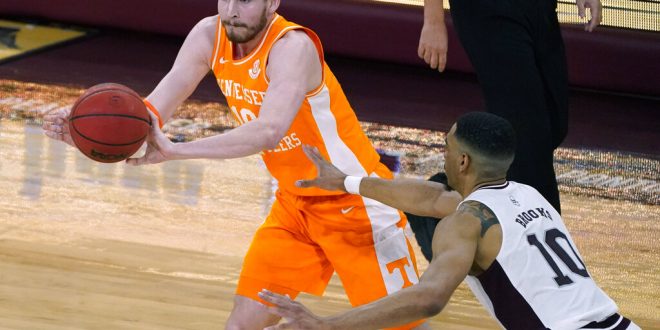 The Razorbacks enter Saturday’s contest with a nearly unbeaten record at home.  Arkansas boasts a 14-1 home record with their only loss coming to Hofstra earlier in the season.

Saturday will also be a red out for the Razorback fans who are in attendance.

Arkansas is led by standout guard JD Notae who is averaging 18.8 points per game while dishing 3.5 assists a game as well. Both are good enough to lead the team. Notae also contributes on the other end of the court contributing a little over two steals a game.

Stanley Umude stepped up and scored 23 points in the Razorback’s last outing against Missouri in a win.

Jaylin Williams has also stepped up as of late for the Razorbacks. Williams has put up 9.1 points and 6.6 rebounds over his last 10 games.

Tennessee is led in scoring by Santiago Vescovi with 13.8 points per game. The Volunteers have gone throughout the season with a different player being able to step up each night in a team effort.

John Fulkerson is a big part of that. Fulkerson is a senior who started as a junior, has now accepted his role as the sparkplug off the bench. Volunteer nation has given him the nickname “Fulky” and is the heart and soul of this team.

Fulkerson is averaging 7.8 points a game adding nearly five boards as well. Not all of Fulkerson’s impact will be shown on the box score. He is the first to dive for loose balls and make the extra hustle play.

This game will have big implications on the SEC tournament at the end of the season.

The showdown will go down at 4 p.m. on Saturday.