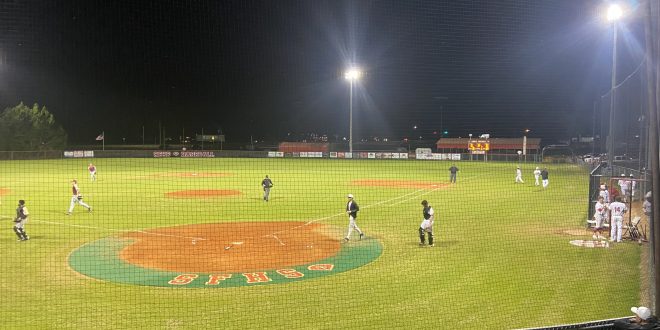 The Santa Fe Raiders fought until the final pitch, but couldn’t stop the North Marion Colts from stealing a 3-1 victory on opening night. The Colts advanced to the 4A state final last season. Despite the loss, Santa Fe Head Coach Travis Yeckring is proud of his team’s effort.

Zane Starling started at pitcher for the Raiders. The game was scoreless through the second inning. However, the Colts quickly changed that in the third inning with a run from Cooper Jones.

The Raiders quickly responded in their next at-bat. A triple from Conner Brown put the Raiders within reach of tying the score.

At the top of the fifth inning, Conner Brown relieved Zane Starling of pitching duties.

Santa Fe’s Dylan Evans took the mound at the top of the seventh inning. First baseman Tyler Whitworth caught the North Marion runner off the bag for the out. Shortly after, another Colts runner attempted to steal second but was unsuccessful due to Devante Mitchum’s quick tag.

In the bottom of the seventh inning, the Raiders kept the game alive. North Marion walked Dylan Evans resulting in a mound visit from Colts Head Coach Dale Hall. The Raiders had two runners on 1st and 2nd with no outs. A flyout from Brown advanced the runner on second to third base. Santa Fe’s Zach Deason was hit by a pitch to load the bases.

Despite the Raiders final efforts, North Marion kept its composure and ended the game with a strikeout.

The Raiders will face the Keystone Heights Indians on Friday, and coach Yeckring is curious to see how his team will bounce back.