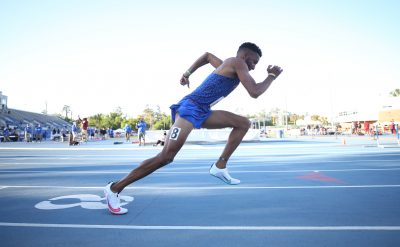 The SEC Indoor Championship is taking place in College Station, Texas, this weekend. Texas A&M will host the teams as they all hope to come out victorious with a championship trophy in their hands.

What to Expect From the SEC

The nation’s top indoor track and field teams are part of the Southeastern Conference, making this meet one full of talent and competition. Nine men’s and nine women’s programs rank in the top-25.

Arkansas is consistently a large presence at the meet. They are currently ranked No. 1 in the nation for the men’s team and have won the SEC the last two years. The Razorbacks women’s team are ranked No. 3 and have not given up the SEC Championship trophy for the last seven years.

Arkansas leads the SEC in four men’s events: Kieran Taylor in the 800m, Amon Kemboi in the 3000m and 5000m and Ayden Owens in the heptathlon. On the women’s side, Shafiqua Maloney leads in the 800m and Lauren Gregory leads in the mile and 5000m.

Louisiana State University’s women’s team is currently ranked No. 4 nationally, while the men’s team sits at No.21.

LSU dominates the 60m hurdles with the fastest times on both men’s and women’s sides by Eric Edwards Jr. and Alia Armstrong. Lisa Gunnarsson leads the conference in pole vault and Sean Dixon-Bodie leads in the triple jump event.

Every year the Gators are a force to be reckoned with at the SEC Indoor Championships. The men’s team is currently ranked No.10 and the women’s team is ranked No. 2.

The last time the men’s team won the SEC title was in 2019. Seven current athletes earned Indoor All-American honors last year. At the 2021 SEC championship, the men earned four top-3 finishes. This year, the team is going into the meet with individual leaders in two events: Jacory Patterson in the 300m and Ryan Willie in the 400m. Patterson, Willie, Jacob Miley and Champion Allison make up the SEC leaders in the 4×400 relay.

The Gator women look to end the Razorbacks’ streak at this year’s meet. The last time they won the title was in 2014, the year before Arkansas took over. They have 12 athletes with All-American honors. Last year, seven athletes finished in the top-3 of their events. Both of the distance medley relay and 4×400 relay teams finished on the podium. Grace Stark holds the fastest time in the SEC for the 60m, Jasmine Moore leads the triple jump while Natricia Hooper follows in second and Georgia transfer Anna Hall is No. 1 in the pentathlon event.