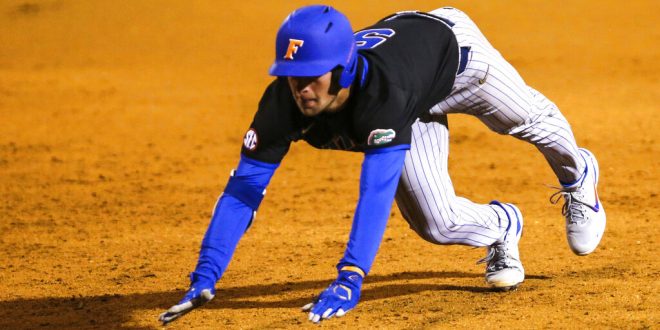 The Georgia State Panthers make their way to The Swamp for an electric weekend series. The Gators look to add to their winning streak.

Magic on the Mound

The Gators enter tonight fresh off of two straight wins against Stetson and UNF. After dropping the opening series to Liberty, Florida needed to get back on track. Head coach Kevin O’Sullivan and his team did exactly that, outscoring the last two opponents 12-2.

Heading into the weekend, Florida needs to focus on shutting down the Panthers’ hitting. The weekend rotation on the mound will consist of:

These three have a combined 11 hits and 6 runs so far on the season. Barco outshines his companions, after winning the SEC Pitcher of the Week. Barco has only allowed one hit in the season, and has essentially been lights out on the mound.

Sterlin Thompson is the hitter that the Gators have needed this season. So far, Thompson has three runs for Florida, with all three being home runs sent into orbit. If Thompson continues to play the way he has, the Gators have a star on their hands.

Josh Rivera and Jud Fabian have also been making splashes at the plate, with four runs each, tied for the team high. Langford Wyatt, Colby Halter, and BT Riopelle sit in second at three hits each. Deric Fabian leads the freshmen with two hits, and has already made a huge impact for the team, following in his brothers footsteps.

Florida has not lost to Georgia State since April 20, 1933, and O’Sullivan does not plan to start now. The Panthers have had a good start to their season, however, winning their first four games, and only dropping to Kennesaw State 4-6 Wednesday night.

Throwing against the Gators, The Panthers have a strong lineup:

These pitchers have only let up seven hits and a strikingly low three runs. The focus this weekend needs to be on connecting with the ball, and getting on base whenever possible.

The Panthers have been electric at bat this season, racking up 43 runs over only four games. The Florida mound needs to be incredibly aware of their arm strength, and pitch more conservative, allowing less connection with the ball.