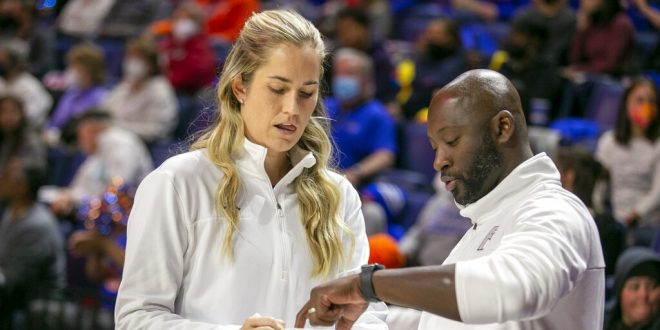 Gators Drops Back-to-Back on the Road

The Florida Gators women’s basketball team failed to capture the win in their final road game of the season. The Orange and Blue were no match for Vanderbilt, losing Thursday, 63-59, at Memorial Gymnasium.

As they did in their last outing against LSU, the Gators late-game rally came up just short as they were down by as many as 10 points in the game.

Entering the game below .500, the Commodores seemed motivated and prepared as they upset No. 15 Florida at home. On senior night, Vandy forced a SEC season-high 28 Gator turnovers that led to an eye-popping 28 points off turnovers.

Freshman Sacha Washington had an impressive evening, leading the team by tallying a double-double. The forward ended the contest with 16 points and 14 rebounds. In all, Vandy finished with four players scoring in double figures as they snapped their six game losing streak.

With similar playing styles, both teams showed the comfortability of pushing the tempo and forcing the opponent into uncharacteristic mistakes. For Florida, that was the case, especially early. Also, Vandy’s mixture of the full court press and zone defense didn’t help. Actually, it gave the Orange and Blue some fits on the offensive end.

After an early one-point lead in the opening quarter, the Gators relinquished a 11-3 run as they trailed 16-9 heading into the next period. That’s when veteran guard, Kiara Smith, picked up the intensity for Florida.

Smith had game-high 18 points to go along with her seven points and six assist in 39 minutes of action.

Back-to-back steals and buckets by Smith cut the deficit to just five points. However, the Commodores lead would peak at 10 with 2:42 remaining before half, 27-17. A 10-4 spurt, led by Smith, gave Vandy the 31-27 advantage entering the locker room.

In the second half, Florida came out swinging as they regained the lead for the first time since the early parts of the game. With 8:03 left before final period, Alberte Rimdal splashed the triple from the behind the arc to give the Gators a 34-33 lead.

From there, Vandy recaptured the lead heading into the final period, 48-46. Then, Vanderbilt to extend their lead by eight with 2:20 left, but Florida gave it one last push.

A 5-0 spurt, which began with a Zippy Broughton three-pointer followed by a Nina Rickards easy scoop and score, made it a one possession game, 59-56 with 1:50 left.

Broughton and Rickards added 14 and 12 points, combining for 6-for-15 from three-point range.

But, after back-to-back scores by senior guard Jordyn Cambridge from the strike, Vanderbilt was able to complete the upset.

The loss now puts Florida at 10-5 in conference play and 20-8 on the season. This defeat is the first time since the beginning of conference competition the Gators fell to back-to-back games.

Now, the Gators looks to bounce back. They travel back home tn the Exactech Arena for their home-finale. The Orange and Blue will welcome Missouri, Sunday, Feb. 27. Tip off for senior day is set for noon.