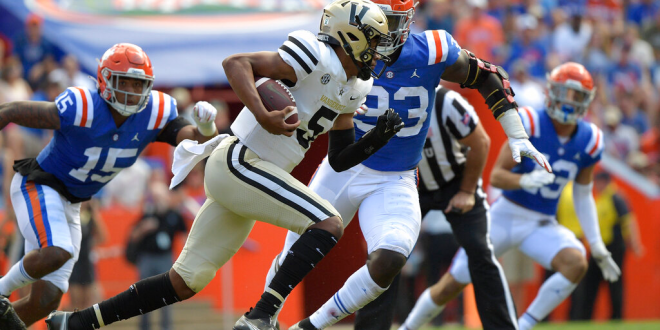 Through the Eyes of Jadarrius Perkins

Junior Jadarrius Perkins has found a home in Gainesville.

The safety started his football career at Mississippi Gulf Coast Community College. He said he was disappointed to be going to a junior college while many of his friends signed with bigger programs.

However, Perkins said he would not trade his JUCO experience. Mississippi Gulf Coast won a national championship in Perkins’ freshmen year. He assisted on two tackles and earned a pass breakup in that game. The following year, the team lost in the state championship after an undefeated regular season. Perkins accumulated 12 tackles and one interception in five games.

After the season Perkins took his talents to the University of Missouri. He was finally getting his chance to play Division I football.

Missouri was more of an experiment for Perkins. He quickly realized that Missouri was not the right fit.

Perkins said the transition to the University of Florida was an easy one. He already had a relationship with Defensive Coordinator Todd Grantham and Head Coach Dan Mullen.

Perkins played in 10 games for the Gators last season and collected 25 tackles. He got his first start as a Gator against Samford.

God be with me on this journey it’s gone be a long ride! pic.twitter.com/vmRYdq7Oxk

The Gators had a record of 6-7 last season. After starting the season 2-0, the team lost a close game to Alabama. Despite the loss, Gator fans and players were excited about the team’s chances to improve and compete for a national championship.

However, the team struggled to find its way through the SEC. A three-game losing streak in the middle of the season seemingly ended the Mullen era.

Florida fired Grantham and Mullen during the season. Billy Napier was named the new head coach on Nov. 28.

It is not always easy for players to adjust to a new coaching staff, especially one that didn’t recruit them. Yet, Perkins said he loves Napier and his staff.

Napier seems to have a plan in place to get the Gators back to their winning ways and Perkins has bought in.

Perkins explained that he wasn’t playing to the best of his ability last season. He was trying to adjust to a new system. However, Perkins said he has been putting in the work this offseason to be his best in the fall.

The NCAA is allowing athletes to earn money through endorsement deals as a part of the new NIL policy.

Perkins is looking forward to cashing in on these deals. But, he said he plans to do what he can to help his family.

Trey is a third year sports media major at the University of Florida, and a WRUF reporter.
@@treyboogie5
Previous 2022 NFL Combine Begins
Next Florida Softball Handed First Loss of the Season by Southern Miss