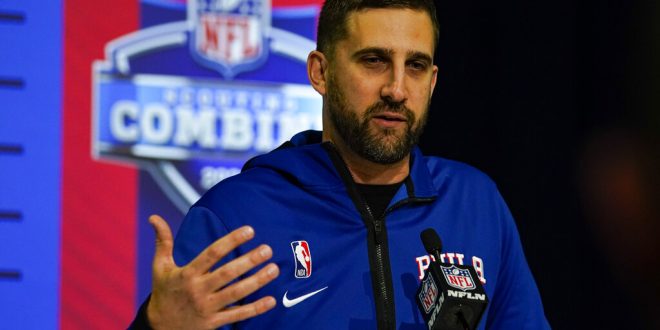 The NFL combine began Tuesday, March 1. As always, the event is being held in Indianapolis at Lucas Oil Stadium.

On field workouts begin on March 3 and will run through the weekend.

The Florida Gators had four players invited. Specifically, Zachary Carter, Kaiir Elam, Jeremiah Moon and Dameon Pierce will be in attendance. Differently, some of the 2022 NFL Draft other elite talents opted to wait until their Pro Days before further performing for teams.

First, Carter had an extremely productive senior year. Playing in all 12 games, he recorded 31 tackles along with 7.5 sacks. As a result, he boosted his draft stock to a mid-round pick. Now, he will have the opportunity to further prove his abilities at the combine.

Additionally, Elam spent his junior season cementing his status as a first or second round pick. Teams interested in Elam will be looking for a corner who can come in and immediately start on the outside. He thrives in zone coverage, where his exceptional length and ball skills help him to make game changing plays.

On the same side of the ball, Moon overcame two season ending injuries and went on to play six seasons at the University of Florida. In 2021, as a redshirt senior, he recorded 49 total tackles. Although he lacks size, his speed and quickness make him a versatile weapon for defenses.

Lastly, Pierce is a tough downhill runner. He generated 574 yards and 13 touchdowns on the ground last year. Furthermore, Pierce had a great Senior Bowl performance.

He is likely a day-three-selection.

As aforementioned, some of the draft’s top prospects decided to wait until their Pro Days before testing in front of teams. Largely, the issues revolve around worries about the event being run in a “bubble”. To increase the safety of the affair, the combine announced that players will only be allowed one medical individual to accompany them. Additionally, rather than separate a measurement, bench press and on-field drills will be the same day.

Subsequently, many agents responded stating the changes would lead to an increase in injuries and lack of available medical attention. Furthermore, some league executives agreed and voiced they would not be disappointed if players waited for their Pro Days to be evaluated.

Nonetheless, the combine is still the biggest asset prospects have to improve their draft stock, and the event will be attended by most.

The combine will be aired on NFL Network. It is also available for stream on the NFL Network website or app.

William Silverman is a junior at the University of Florida from Philadelphia who is interested in pursuing a career in business, communications and journalism.
Previous Gators Women’s Hoops Set to Begin SEC Tourney
Next Through the Eyes of Jadarrius Perkins