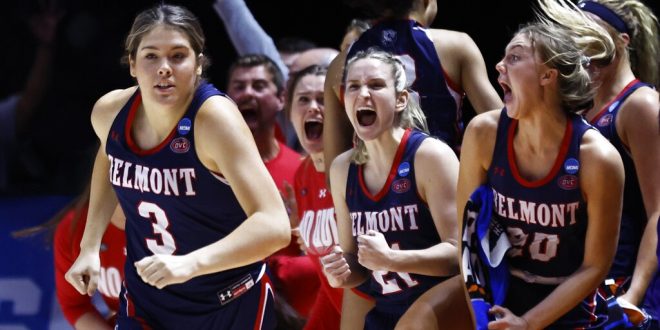 Belmont players react to a 3-point basket during the second half of a college basketball game against Oregon in the first round of the NCAA Tournament, Saturday, March 19, 2022, in Knoxville, Tenn. (AP Photo/Wade Payne)

Belmont marches into the second-round with a 13-game winning streak. The No. 12 Bruins pulled off a first-round upset, knocking off No. 5 Oregon 73-70 in double-overtime. The Bruins advance in the tournament to take on the No. 4 Tennessee Vols, who overcame No. 13 Buffalo 80-67.

The Bruins hit the big shots down the stretch when they needed to, and their offense can compete with anyone the way they shoot from three-point range. Belmont hit 12 three-pointers against Oregon, and the last time a team did that to Tennessee, the Vols were eliminated from the SEC Tournament.

Destinee Wells, Belmont’s leading scorer, had 16 points and seven assists. However, Tuti Jones led the Bruins with 22 points, a perfect 4-of-4 from behind the arc. This is the second straight year Belmont has won in the first round as a 12-seed.

The head coach Bart Brooks is in his fifth season at the Nashville school, fashioning an impressive 123-33 record.

The Lady Vols’ offense was rolling after halftime against Buffalo. The Tennessee Vols scored 48 points in the second half and only nine of those points were from three-pointers. Tennessee was shooting 73% near the end of the third.

Nobody on Tennessee’s current roster has played in a Sweet 16. This is a game Tennessee can dominate in the paint, but Belmont is hot right now, and Tennessee hasn’t gotten out of the second round since the 2015-16 season. The Lady Vols are capable of winning this game, but it has to start on defense and they have to execute offensively.

The No. 4 seed Lady Vols and No. 12 seed Bruins are slated to tip off at 7 p.m. ET at Thompson-Boling Arena, with the winner advancing to the Wichita Regional. The Bruins are 6-4 all-time against Tennessee, although Tennessee won the last meeting, 84-76.