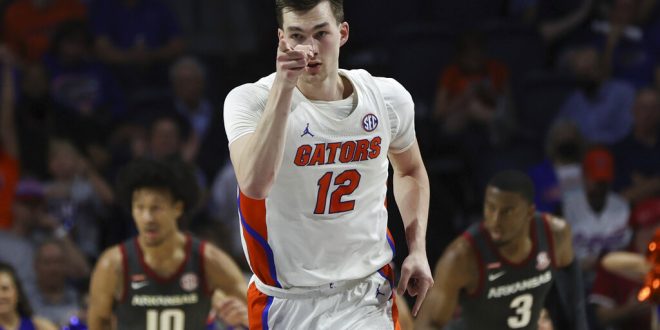 Florida forward Colin Castleton (12) celebrates after making a shot against Arkansas during the first half of an NCAA college basketball game Tuesday, Feb. 22, 2022, in Gainesville, Fla. (AP Photo/Matt Stamey)

Fifth-year senior Colin Castleton has announced on Twitter he is returning for the 2022-2023 season.

The return of Castleton is huge for new head coach Todd Golden. Notably, the big man was named Second Team All-SEC in his second season at Florida. Particularly, he led the team with 16.2 points per game and nine rebounds per game. Along with stellar statistics, Castleton brings a sense of veteran leadership to the team. Over the course of his first two seasons within the Gators, he has seen his role increase both on and off the court, with his leadership skills taking center stage.

When Golden took the reigns of the Gator Basketball program in March, he understood the assignment at hand. A program that expects success, and a fan base that often has lofty expectations. Having not reached the Elite Eight since 2017, it’s safe to say the past five years have drawn criticism from the fan base.

Good news for Golden, his first few weeks on the job have consisted of many ups, with the return of Colin Castleton leading the way.

Along with the return of Castleton, former Belmont guard, Will Richard, announced that he is joining the Gators. A stand-out while at Belmont, Richard was highly regarded as one of the top guards in the transfer portal and is a major get Golden’s squad.

Coming off a 2021-2022 season where the Gators finished fifth in the SEC, and ended their year with a second-round N.I.T loss to Xavier, expectations for the upcoming season are up in the air. With a new head coach, and many new pieces added to the roster, only time can tell.

But during that time, Gator fans have every right to be excited for the season to come.