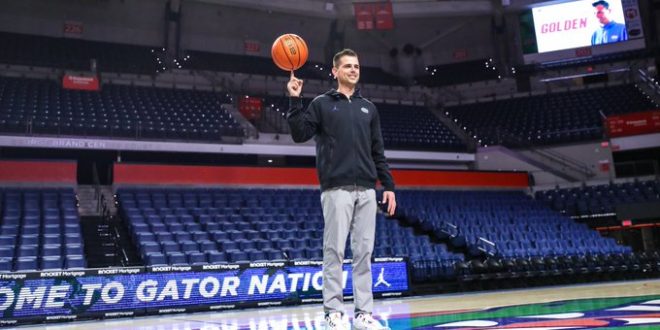 Florida basketball went on a search for its next head coach after the departure of Mike White, as he moved on to fill the head coaching position at Georgia. Moreover, White’s exit came directly after the Gators’ second round loss in the SEC tournament to Texas A &M. Afterward, Florida ended its regular season in the NIT tournament falling 72-56 to Xavier in the second round.

Golden on what to expect from Gators basketball :

Golden on what his success process is :

“Golden is a man of high character and integrity his passion, intellect and innovation. Todd Golden already is where the sport of college basketball is heading and for the Gators that future is now.”

Golden on his conversation with former head coach Billy Donavan:

Golden spent six years coaching at the University of San Francisco before accepting the head coaching position at Florida. In Goldens’ 2021-22 season, he took USF (CA) to the NCAA tournament marking it their first time since 1998. However, Golden has had success in the SEC after spending two season at Auburn, with Bruce Pearl.