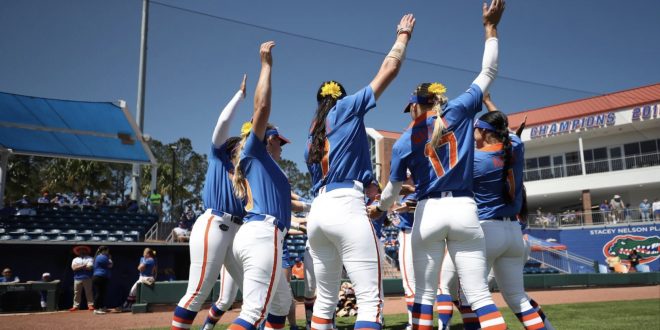 The number seven Florida Gator softball team (30-9, 7-7 SEC) lost 2-1 against the fifth ranked Alabama Crimson Tide (33-5, 10-4 SEC) at Katie Seashole Pressly Stadium Sunday in extra innings. It was a defensive game for the first five innings before the bats got hot in the sixth. However, Alabama edged its way past Florida in the ninth to secure the series win.

It was a pitcher’s playground Sunday afternoon with the first five innings scoreless. Gator pitcher Lexie Delbrey had quite the day despite the loss. The freshman kept Alabama at bay, and only in the sixth inning did she allow two hits and one run.

Florida right-handed pitcher Natalie Lugo took over for Delbrey in the seventh inning. In her three innings in the circle, Lugo allowed five hits and one run. The fifth year player also had four strikeouts in the game.

For Alabama, Lexi Kilfoyl pitched for eight innings and recorded seven strikeouts, two more than both Delbrey and Lugo had in the game combined. Seven hits and one run were permitted by the junior, but Alabama’s defense kept Florida from scoring more than one.

Bats heat up in the sixth

Offensive action picked up at the top of the sixth after Alabama’s Ashley Prange tripled to right center. After Ally Shipman’s walk and with two outs on the board, Bailey Dowling doubled on a payoff pitch allowing Prange to score, making it 1-0 Alabama.

That lead wouldn’t last for long. Minutes later, Florida’s Skylar Wallace homered to center field, tying the score up 1-1 in the bottom of the sixth.

B6 | TIE GAME‼️ @Wallace2Skylar with a solo shot to center! #GoGators

Bats were quiet once again in the seventh and eighth innings, but Alabama’s Dowling struck gold with a leadoff dinger in the top of the ninth. Alabama’s defense kept Florida from scoring and the Crimson Tide won, 2-1.

Walton said even with this loss, the goal is to find a way to continue to get better, and where the Gators sit now is where he expected this team to be.

Kaitlyn Wadulack is a third-year journalism student specializing in sports and media at the University of Florida. You can reach Kaitlyn at k.wadulack@ufl.edu
Previous Florida Gators Baseball Clinches Series Over Arkansas
Next Scottie Scheffler wins 2022 Masters