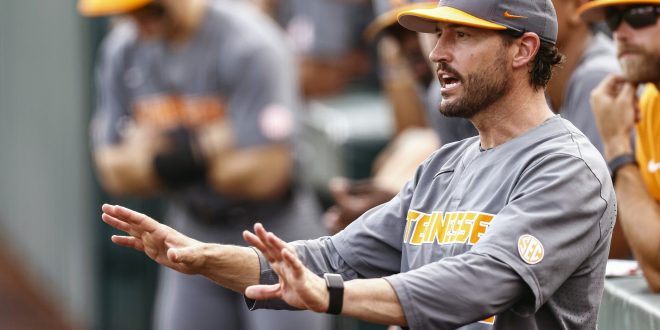 FILE - Tennessee head coach Tony Vitello reacts to a call during an NCAA college baseball super regional game against LSU, Sunday, June 13, 2021, in Knoxville, Tenn. The Vols, the new No. 1 team in two of the major polls Monday, March 28, 2022, have shown no weaknesses to date. They lead the nation in batting average (.338), home runs (64) and slugging (.683) and are second in scoring (11.1 runs per game). (AP Photo/Wade Payne, File)

After confronting an umpire on Saturday, Tennessee Vols baseball coach Tony Vitello will miss the first two games of the Volunteers series at Florida this weekend. Notably, in the first inning against Alabama last Saturday, Vitello was unhappy with the reaction to his pitcher getting nailed by a hit and immediately ran to let the umpire know about it. Then, chaos transpires as Tennessee scrambles to react to their pitcher getting hit by a line drive.

The entire ordeal shows both coaches in heated arguments with the umpires, just minutes after the game began. Crucially, after pitcher Chase Dollander hit the grass, Vitello rushes out of the dugout. Meanwhile, pitching coach Frank Anderson talks with the crew. Before getting his fair share of words in, Vitello got tossed and chest bumped the umpire. Afterward, he walked off back to the dugout and exited the game.

Tony Vitello bumps the 3rd base umpire after being ejected in the top of the first inning. Certainly looks like a suspension will be coming. Frank Anderson also ejected. pic.twitter.com/7QiOrTmb4f

The SEC handed down a four-game suspension for Vitello. Accordingly, he served one game against Alabama, the next against Bellarmine on Tuesday, and his final two against the Gators on Friday and Saturday. Additionally, Anderson served a one-game suspension last Sunday in game three of the Alabama-Tennessee series.

Vitello will return to the dugout on Sunday, which could mark a defining game in the series. Surely, if the Gators steal one of the first two games, they could be in prime position to give the Vols their first series loss on the season.

"That's one of the most fiery guys I've ever met.. I'm glad I'm his player and I' glad he's my coach"

Sitting atop D1Baseball’s Top 25 poll, the Vols continue to run through opponents this season, tallying 33 wins and only dropping three games. Significantly, in game one of the Alabama series, the Tide stole one from the Vols, winning 6-3. Though, Down 1-0 in the series, Vitello was ejected in game two, sparking a 9-2 victory. Then, the Vols recorded a 15-4 victory in game three, winning the three-game series. The Vols have yet to drop a series this season, only dropping games to Alabama, Texas and Tennessee Tech. So far this season, the Vols are 12-1 in SEC play.

While many on the outside thought Vitello’s actions were unnecessary, his team backed him up on multiple occasions. Assistant coach Josh Elander stands pat behind his fellow coaches. The players rallied behind their coach, excited about the energy he gave to protecting them.

The 22-14 Gators will be unranked as they host the Vols at Florida Ballpark this weekend. Florida is 6-9 in SEC play and will try spoiler as the Vols’ season ticks down. Before hosting Tennessee, Florida will take on Stetson at Florida Ballpark on Tuesday as the Volunteers face off against Bellarmine. First pitch between the Gators and Vols occurs at 6:30 on Friday.