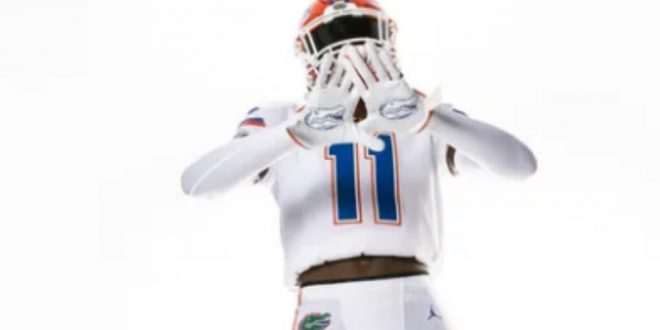 The Florida Gators landed 2023 wide receiver Tyree Patterson (Eustis, FL) following its annual Orange and Blue spring game. Sports247 lists the 6-foot-2 WR as a three-star prospect and the No. 128 overall wideout in the class.

Florida was the first Power Five program to offer Patterson a scholarship with WRs coach Keary Colbert leading the recruitment. Colbert compared Tyree Patterson to former USC WR Drake London, who is slated to be selected high in the NFL Draft. During his junior season in high school, Patterson hauled in 53 passes for 1,078 yards and 13 touchdowns.

Patterson has the build of an outside target receiver. Weighing 180 pounds, the 6-foot-3 WR is capable of getting over the top of a defender with ease. He also understands ball-tracking which enables him to make adjustments with the ball in the air.

Patterson excels near the line of scrimmage, completing short catches and running them downfield. However, he has had a fair share of downfield targets and catches, too. At the prep level, Patterson caught passes in the backfield only to take them the distance. In addition, he was able to get past defenders and out-work them downfield.

At around 180 pounds, it will be tough projecting how big Patterson will become as an athlete. Still, he exhibits plenty of traits to build on, with his ability to break tackles in the open field and explode out of short passes.

Peterson will be the first 2023 prospect to commit to the program since Billy Napier took over as head coach. Given the hole the Gators were in for the class of 2022, Peterson will be kickstarting the new era under Napier. Florida is expected to take at least three receivers in the 2023 class and is prioritizing several top-200 prospects.