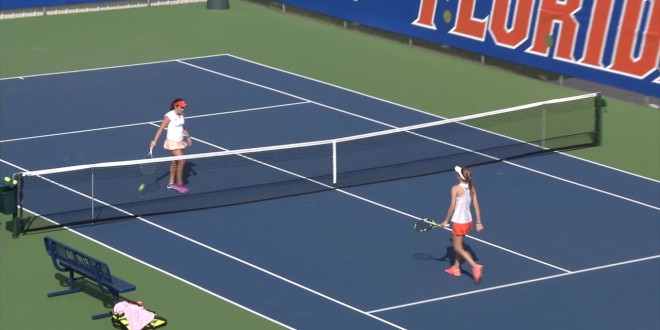 Both the Gators men’s and women’s tennis teams look to continue their winning ways in their respective NCAA Tournaments. Both teams will face-off against the North Carolina Tar Heels on Friday afternoon, but will compete in different locations. The men’s squad will host UNC in Gainesville while the women will travel to Chapel Hill for their bout.

No Signs of Slowing Down for the Men

The Gators are seeking their second-straight national championship, and they have a solid chance to bring another trophy to Gainesville. The team sports a 25-2 overall record and have not lost a contest since Feb. 18. The team was unfazed through their first two rounds of NCAA Tournament play, steamrolling both New Orleans and No. 29 Miami (FL) 4-0.

Friday’s matchup against No. 15 UNC will mark the men’s sixth-straight NCAA Round of 16 appearance.

The Gators advance to the Round of 16 for the sixth-straight season!#GoGators / @WellsFargo pic.twitter.com/iLe2utYG2E

Tall Task Ahead for the Women

The Gators women’s tennis team will have its work cut out for them, facing the No. 1-ranked North Carolina team on the road. After defeating South Alabama and No. 35 Florida State with impressive 4-0 and 4-1 victories, the 21-6 overall Gators will make their first Round of 16 appearance since 2017.

Sara Dahlstrom clinches and the Gators defeat FSU for the time this season and are headed to the for the first time since 2017!

School’s Out, Serves Out

With the end of the 2021-22 school year at the University of Florida, the Gators tennis teams will be dedicating all of their time, devotion and energy to their NCAA Championship paths. Friday’s contests are sure to be action packed.