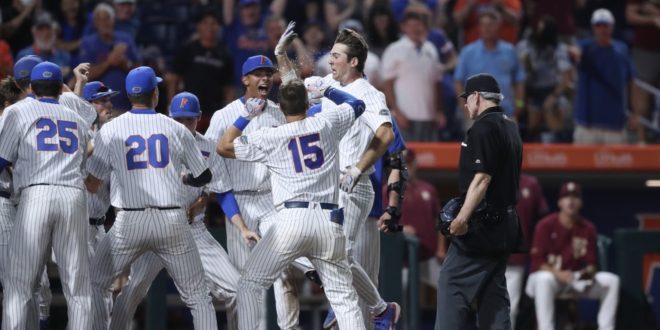 Sterlin Thompson hit a walkoff two-run home run to push the Gators past the Florida State Seminoles in a game on May 17, 2022. (Photo by Jordan McKendrick from floridagators.com)

Sterlin Thompson had a game-winning moment where he hit a walk-off home run that led the Gators in victory with the final score being 7-5. This helped the Gator baseball team redeem themselves against their in-state rival Florida State.

Last time they went against the Seminoles was on April 12 at Tallahassee. The Gators had a tough loss where the Seminoles dominated the Gators throughout the entire game, with the ending resulting in 5-0 win for FSU.

Thompson came in clutch at the bottom of the ninth inning as the score was tied 5-5. His two-run homer led the Gators to defeat the Seminoles and provided Thompson with a college career highlight as this was his first walk-off hit.

In the press conference, Thompson demonstrated a lot of excitement as he explained how big of a moment the two-run homer was for him.

He also mentioned how that moment was something he dreamed of as a kid, and the fact that it was against the Gators’ ultimate in-state rival FSU made the moment an unforgettable experience.

Even though the walk-off home run was a significant part of the game, Gators head coach Kevin O’Sullivan mentioned in the press conference that this was a good team win and noted the efforts of Sterlin Thompson, Ty Evans and Colby Halter.

The Gator players that had the most home runs in the game were Wyatt Langford and Ty Evans. Langford had three home runs, and Evan had two.

The Gators have three more regular season games left before traveling to Hoover, Alabama, for the SEC baseball tournament. Prior to the tournament the Gators will host a three-game series against the South Carolina Gamecocks. The series kicks off on Thursday at 7 p.m.

Cristina Santiago is a senior at the University of Florida studying journalism with a concentration in sports and media.
@https://twitter.com/CristinaEspinet
Previous Chris Doering Talks Florida College Football
Next Corey Perry, Lightning Defeat Florida Panthers In Round 2