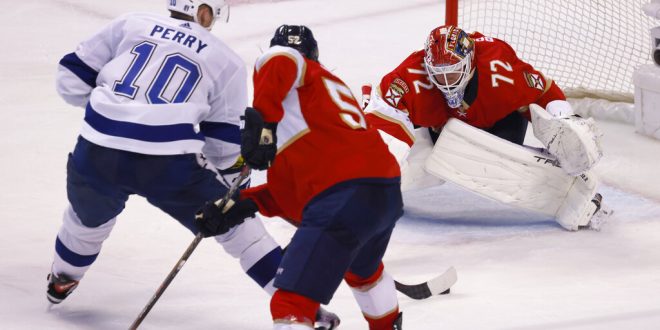 In his first game as a 37-year-old, Lightning forward Corey Perry scored and assisted on two goals to help Tampa Bay take down the Florida Panthers in Game 1 of the second round of the Stanley Cup Playoffs.

The Florida Panthers started off strong, killing off two penalties then taking a 1-0 lead before the first intermission. This changed to a tie between the rivaling teams at 1-1 just before the end of the second period. The Tampa Bay Lightning took over in the third period scoring three to win 4-1.

In the last five minutes of the game, the Florida Panthers earned a power play when Anthony Duclair scored on a loose puck making the score then 2-2. The Tampa Bay Lightning head coach Jon Cooper challenged the play and argued that the puck was out of play because it went off the netting. After video review it was overturned and the score remained 2-1 with Tampa Bay Lightning in the lead.

Tampa Bay Lightning went 3-for-6 on power plays and killed all three of the Panthers power plays. Panthers are now 0-21 power plays in seven Stanley Cup Playoff games. Florida Panthers head coach Andrew Brunette talked about the struggles in an interview. Coach Brunette stated that “We’re still learning and unfortunately we had to learn again tonight. We will be better next game”.

Coach Brunette: “We’re still learning and unfortunately we had to learn again tonight. We will be better next game.” pic.twitter.com/u6Zo3mKLfv

When these two teams met in last years playoffs, the Tampa Bay Lightning won the first two games of the series against the Florida Panthers and took the series in six games. After a Game 1 victory Tuesday night, the Lightning could be on their way to another series victory this year.