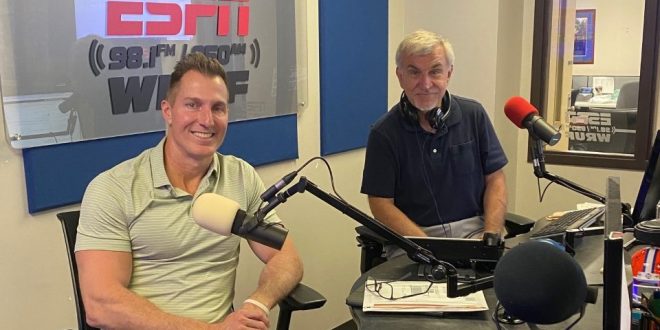 Doering, a Gainesville native, attended the University of Florida and was drafted in the 1996 NFL draft. He played professionally in Indianapolis, Denver, Washington and Pittsburgh.

Doering talked to Russell about the difference in fan turnout in the ’90s versus today and ways it can be fixed.

In the new age of the NIL, the focus has shifted from the student-athlete’s right to obtain a deal to how much money they are making from the deal. Doering and Russell talked about the possibility of unionization or bringing workers into an organization for dealing collectively with employers.

Joining a union means that the student-athletes will be able to have a say. They would be negotiating important elements of their careers in collaboration with their sponsors. That could include different health care options, workplace safety enhancements, and not being described as a student-athlete but an employee.

Doering talked about the uncertainty of NIL deals and contrasted them to salaries in the NFL.

Florida Gators in the SEC

Doering talked about how he feels the Gators have performed in the past two seasons. He also discussed his opinion on whether or not Florida will have a bounce-back year.

Doering gave two reasons that he thinks the Gators will be able to close that gap: location and resources. Being located in one of the best states for recruits, Doering believes that they need to keep recruits from leaving Florida to go to other schools out of state such as Alabama or Georgia. Also, being the flagship school of the state of Florida and having committed boosters can bring in some much needed resources to keep these recruits from leaving the state.

Anthony Richardson and the Importance of Consistency

Anthony Richardson, Gator quarterback, made his first career start at quarterback against Georgia this past season. He also scored his first career rushing touchdown on a career-best 73-yards run during Florida’s season opener against Florida Atlantic.

Doering talked about Richardson and the importance that he learns consistency and stays healthy for the upcoming season.