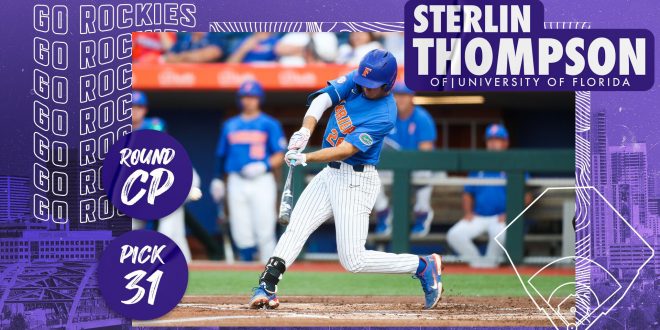 Florida Gators outfielder Sterlin Thompson becomes the highest ever drafted outfielder in program history after being drafted with the 31st overall pick in the 2022 MLB Draft. (Photo from @Rockies on Twitter)

It’s that time of year again. The 2022 MLB amateur draft started Sunday and will go till Tuesday. Three players from the Florida Gator baseball program have been selected Sunday, day one of the draft.

Outfielder Sterlin Thompson was chosen in the first round by the Colorado Rockies. The Rockies selected him with the 31st overall selection. Previously owned by Brad Wilkerson, Thompson is now the highest drafted outfielder in the history of Florida baseball. Florida now has had 11 players taken first round ever since Kevin O’Sullivan had become head coach in 2008.

Since then the Gators have won their first national title (2017), earned 11 national seeds for the NCAA tournament, and have won five Southeastern Conference titles and six SEC Eastern Division titles. During his career, O’Sullivan has also dominated many rivalries. Florida is 97-51 against the three primary rivalries being Florida State University, the University of Miami and University of Georgia.

In the second round, two more Florida Gators were selected. Pitcher Hunter Barco was selected by the Pittsburgh Pirates with the 44th overall pick. During his third year, he was 5-2 with a 2.50 ERA. Barco sustained an injury last season and underwent Tommy John surgery, if he can recover he is expected to be an excellent addition.

The last Gator drafted on day one was outfielder Jud Fabian. Fabian has already been through this process in 2021 when he was selected by the Boston Red Sox, but negotiations did not pan out. Fabian is an excellent player, he belted 20 home runs in 2021 making him the fifth player in Florida Gator baseball history to do that. In 2022, he did even better. Fabian had 24 dingers, 10 fewer strikeouts and 18 more walks. This year the Baltimore Orioles selected Fabian with the 67th overall pick.