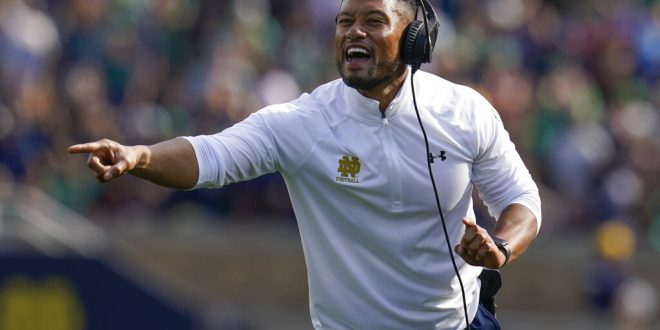 Can Notre Dame bounce back?

With the second loss of the season coming at the hands of Marshall, Notre Dame will look to secure their first win of the season against the California Golden Bears. While this might seem like an easy task the deck has been stacked against rookie head coach Marcus Freeman so far this season.

Freeman announced Monday that starting quarterback Tyler Buchner would miss the remainder of the 2022 season with a shoulder injury.

In his place Junior Drew Pyne will take up the mantle of starting quarterback. Pyne has played four games over his two seasons with Norte Dame. Along with this Pyne entered the game on Saturday against Marshall.

Freeman said that much of the offense will remain unchanged with Pyne under center. Freeman sees the only difference in Pyne and Buchner in terms of the offenses capabilities coming at the quarterbacks legs and their ability to run.

However, Freeman has bigger things to worry about with a brutal loss coming from an unranked Marshall team. Many expected Norte Dame to win big against them being 20 point favorites. Freeman must try to salvage what is left for this season and lean on the culture he has built if he wants to have a winning season.

Notre Dame fans should not panic off these two losses at least not yet. While it made headlines for the week and is one of the bigger upsets of the week. The thing that people will remember is more important is how Freeman responds. If he is able to get eight or nine wins then fans should be hopeful for the years going forward. However if Notre Dame lets these two games determine how the rest of the season goes, the culture that freeman has built will come into question and fans should start to ask is this our guy.

And while the hopes for the College Football Playoffs are gone for the Norte Dame, fans should enjoy the remainder of the season and look forward to one of the better recruiting classes coming to them next year.