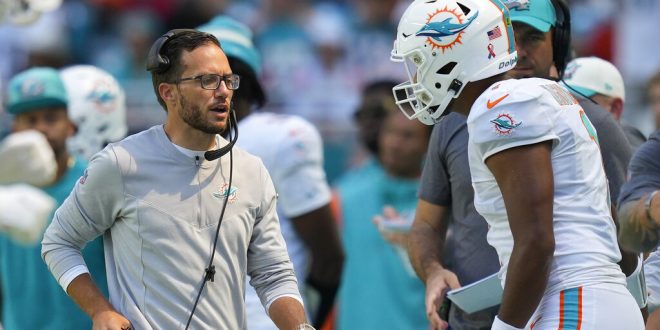 With the first week of NFL coming to an end Monday night, new AFC head coaches have made there debuts to their teams. There were five new head coaches in the NFC and two in the AFC. Here is the rundown on Mike McDaniel and Nathaniel Hackett.

Formerly a college football player for Yale University, McDaniel’s has roots starting off as an intern for the Denver Broncos. Since then he has worked for the Houston Texans, California Redwoods/Sacramento Mountain Lions, Washington Redskins, Cleveland Browns, Atlanta Falcons and most commonly known for the work he has done with the San Francisco 49ers.

McDaniel wad hired by the 49ers in 2017 as the run game coordinator under current head coach Kyle Shanahan. During 2019, the 49ers played in Superbowl LIV where they lost to the Kansas City Chiefs 31-20. McDaniel was later promoted to offensive coordinator in 2020. In 2022, following the loss to the Los Angeles Rams, McDaniel’s concluded his history with the 49ers.

In 2022, the Miami Dolphins hired McDaniel’s to be their 14th head coach. Since being hired, McDaniel led his team to a win Sunday against the New England Patriots, 20-7.

In 2015, the Jacksonville Jaguars hired Hackett as a quarterback coach, then was later promoted to become the offensive coordinator. Later that year, Hackett led the team to win the AFC South as well as an appearance at the AFC Championship game in 2017. Hackett was later fired by Doug Marrone for not performing as well the following year.

During his time with the Green Bay Packers he was an offensive coordinator under current head coach Matt LaFleur. During 2020, Hackett and quarterback Aaron Rodgers led the team to have their best scoring offensive season in the league.

In 2022, Hackett was hired by the Denver Broncos as head coach. Since then, the Broncos lost to the Seattle Seahawks 17-16.