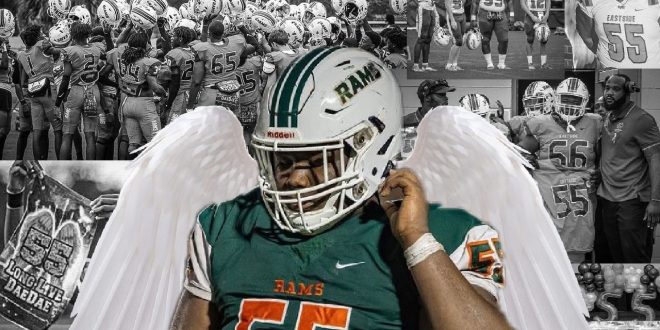 A crowd of approximately 500 people filed into Eastside High School’s auditorium on Saturday to honor the life of Dabien White. White, better known as “DaeDae” was an offensive lineman on Eastside’s football team. White, 17, passed away in the early morning of Sept. 4. The cause of death was not listed in White’s obituary.

Following White’s death, Eastside students took it upon themselves to create a petition asking for a ceremony to honor their beloved teammate and friend. The efforts paid off as the school hosted a beautiful ceremony that showcased an outpouring amount of love and support. White’s family, friends, teammates, coaches and staff all joined together to mourn the loss and celebrate the life of DaeDae.

At the front left corner of a packed high school auditorium sat the Rams football team. The players were dressed in orange and white jerseys to honor their fallen teammate.

Additionally, ahead of the first row of seats lay White’s coffin, painted in the colors of the school. On either side of the coffin were large bouquets of roses surrounded by an arrangement of balloons writing out the number 55.

To the right sat White’s football helmet and jersey. A glass case displayed the white jersey with the orange number 55 written across the front. Rams football head coach Harold “Gator” Hoskins rose from his seat to present the jersey to White’s family.

“He’s the only player that ever wore this jersey,” Hoskins shared with the family. “This is your jersey.”

Eastside took the field for their first full game without DaeDae on Friday. The Rams took home their first loss of the season against the Bradford Tornadoes.

“No way we can replace him,” Hoskins said. “We’ll honor him every day we live. Every day, every play. We’ll dedicate the rest of this season to DaeDae.”

Christopher Stokes, a bishop at the New Beginning Christian Worship Center advised the team during the ceremony on how they can continue to honor their beloved teammate. Stokes told the team to work harder in every aspect of their life, both on and off the field.

Kane Smith, a friend of White’s since elementary who also played basketball with him, had the following to say about Saturday’s events.

“The ceremony had my emotions boiling,” Smith said. “It just shows that you need to love and cherish the time with your family while they’re here. This football and upcoming basketball season is dedicated to DaeDae.”

Eiress McCallum, a cousin of White’s, said the ceremony was like “a see you later” from us to him.

“DaeDae had this way of grabbing people’s hearts,” McCallum said. “[He] was that friend that would always make you laugh no matter what. He will laugh with you and be by your side throughout it all.”

Friends and family alike described White as a “gentle giant” for his loving character.

“Dabien was a gentle giant,” Miracle Bristol, a classmate and friend of White’s said. He always made sure you were okay, put a smile on your face and checked on you. He knew everything and everybody.”

Dedication to the Game

While White was adored off the field, he was also known for the exceptional performance he brought to the game, as well as the impact he had on his teammates.

“He never talked down on his teammates,” Smith said. He always uplifted them and wanted to get the best out of them. Dabien was a comedian, a family guy and a hard worker. He just wanted to make his mom and family proud.”

Johnson also spoke on the type of teammate White was.

“DaeDae was always motivating, but he was also there to keep our spirits up if we were having a bad practice,” he said. “He was a very trustworthy person that you could talk to and not worry about any judgment.”

While White is no longer roaming the halls of Eastside high school or suiting up to take Citizens Field with his teammates, he will always live on in the hearts of those who knew him.

“Although he is not with us in physical form, he is with us, telling us to get up and get back to it,” McCallum said. “We have to strive for him, just how he’d want it. I don’t have words that will fully express how much I love Dabien, but I love him dearly. He was an incredible soul and will greatly be missed by all those who knew him.”

Ellie is a third-year sports and media journalism major at the University of Florida.
@ellie_shreve
Previous Through the Wire Episode 2
Next Mississippi State Looks to Rebound Against Bowling Green 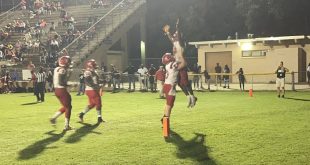 One week after weather suspended play against rivals Buchholz, the Eastside Rams were back at …