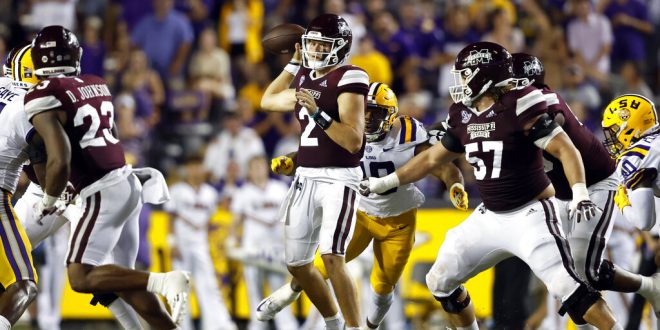 After suffering a defeat against the LSU Tigers last week, the Mississippi State Bulldogs look to bounce back against Bowling Green on Saturday. Kickoff is scheduled for noon.

At the end of the third quarter in Death Valley, the Bulldogs held a 16-10 lead over the Tigers. It looked like Mike Leach’s team could emerge from one of the most hostile stadiums in the nation with a conference win. However, momentum shifted in the fourth quarter, and Mississippi State allowed 21 straight points to lose 31-16. During the SEC teleconference, Leach relayed his frustration with his team’s lackluster performance.

On the other sideline, Bowling Green is coming off a thrilling home victory against Marshall in overtime. Despite earning their first win of the season, the Falcons are hoping the momentum will carry into this week’s matchup with the Bulldogs. Bowling Green opens as a 30-point underdog.

For this home matchup with the Falcons, Mississippi State will be wearing alternate uniforms to celebrate the legacy of Frank Dowsing Jr. and Robert Bell. In 1969, Dowsing and Bell became the first African American football players to put on Mississippi State uniforms.

On Saturday, @HailStateFB will honor Frank Dowsing Jr. and Robert Bell with special alternate uniforms. Find out what some current players and one coach had to say about continuing Dowsing and Bell's legacy at MSU. https://t.co/S34HlKUsE4

What to Keep an Eye On

Both of these teams have offenses that are centered around the ability to put the ball in the air. On the ground, neither team averages more than 100 yards per game.

Although the Falcons’ victory over Marshall shows promise, the size and speed of an SEC opponent can be overwhelming. Bowling Green’s offense will have to heavily rely on senior quarterback Matt McDonald to keep drives churning. McDonald already leads the Falcons in both passing and rushing yards and he has yet to record an interception on the season. Bowling Green will need McDonald to continue to protect the ball while taking enough risks to offset the scoring of an SEC-caliber offense.

For Mississippi State, they have all the tools to win this game by a substantial margin. They have size in the trenches, a stout secondary and an explosive quarterback in junior Will Rogers. This game will come down to execution for the Bulldogs. The wide receivers need to be able to win one-on-one matchups and the defensive line needs to put pressure on McDonald.

If every Bulldog player does their job individually, this should be an easy win for the team in Starkville.