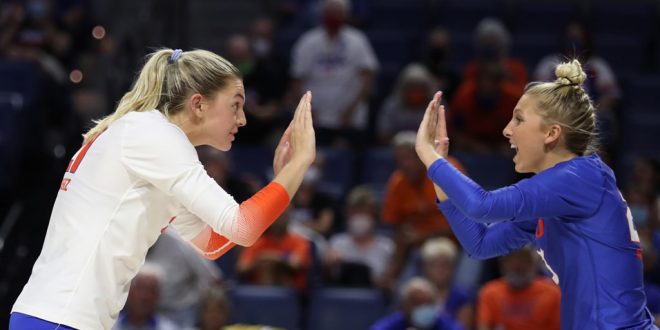 McKissock started playing volleyball at around 12 years old and instantly fell in love with the sport. She became involved in her middle and high school volleyball teams, as well as club volleyball. McKissock’s sister Matti was also into volleyball, and Elli attributes her success to her sister. Matti started her collegiate career at Georgia Tech and is currently playing at UCLA.

McKissock has been playing volleyball for a large portion of her life and has the achievements to prove it. In her high school years, McKissock was on her high school’s All-State Team in 2018 and 2019. She also was on Under Armour’s First Team All-America in 2019 to close out her high school career.

Throughout her club volleyball career, McKissock racked up numerous accolades.

These achievements take time, but McKissock is proud of the work that she has put into her collegiate career.

Originally from Windermere, McKissock had her eyes on Florida, but it wasn’t her only option. With a little bit of help, she realized that Florida is where she wanted to be.

At the beginning of the month, McKissock reached 1,000 career digs, an achievement that some never reach. McKissock is very thankful for this huge accomplishment but says that this is only the beginning of where she is hoping this team will go.

McKissock plans on getting her degree in Telecommunications but is unsure what the future holds for her.