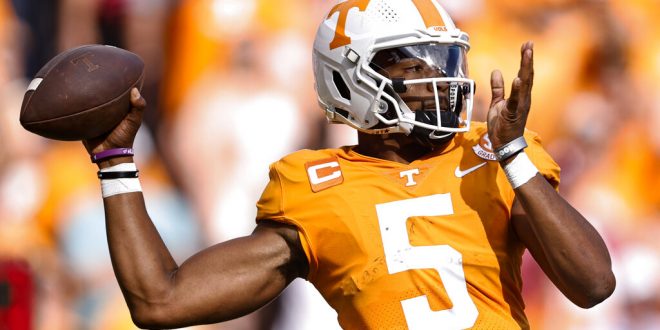 Tennessee quarterback Hendon Hooker (5) throws to a receiver during the first half of an NCAA college football game against Alabama Saturday, Oct. 15, 2022, in Knoxville, Tenn. (AP Photo/Wade Payne)

The Tennessee Volunteers (8-1, 4-1 SEC) will host the Missouri Tigers (4-5, 2-4 SEC) on Saturday at Neyland Stadium. Kickoff is scheduled for noon, and the game will air on CBS.

The Vols will look to get back on the win column after suffering their first loss of the season against top-ranked Georgia on Nov. 5. Tennessee, led by head coach Josh Haupel, looks to finish their home slate undefeated and improve its resume for the College Football Playoffs.

After an impressive 8-0 start, the Volunteers had their undefeated streak snapped by a powerful Georgia team.

During the game, the Bulldogs held UT quarterback Hendon Hooker to an unusual 195-passing-yard performance with zero touchdowns and an interception. In eight starts this season, Hooker had registered at least two touchdowns and 200+ passing yards per game on his quest to a Heisman Trophy candidacy.

Heupel said that, although disappointing, the loss served as an opportunity to grow. The Vols are now focused on getting back to their winning ways in front of a sold out home crowd, he said.

The Vols’ explosive offense, which averages over 45 points and 336 yards per game, will meet a tough defense in Mizzou. The Tigers rank 19th among all FBS teams in rushing defense, allowing 110 rushing yards per game. They also rank 31st in scoring defense, holding opponents to 21.44 points per game.

Mizzou Looking for an Upset

The Tigers are coming off a 21-17 home loss to Kentucky on Nov. 5. Despite a fourth-quarter comeback effort, Mizzou couldn’t close out on the Wildcats, eventually losing by four points.

The Kentucky game has been a reflection of the Tigers’ season. This year, Mizzou has been mostly in close games, with all of their SEC losses being by one possession or less. Those included a nearly upset win over Georgia on Oct. 1  and an overtime loss against Auburn on Sept. 24.

Mizzou head coach Eliah Drinkwitz said the team is excited for the challenge.

Drinkwitz also said the defense will need to contain high-caliber players such as Hooker and wider receiver Jalin Hyatt. The Tennessee duo has combined for an SEC-leading 14 passing touchdowns and 970 yards.

One of the key points for Mizzou will be to find consistency from quarterback Brady Cook. This season, Cook has thrown seven interceptions and six touchdowns, which has led to close losses.

Since Mizzou joined the SEC in 2012, both teams have gone 5-5 when playing each other.

The Vols have won the last three games, including a 62-24 slugfest in 2021. However, the Tigers have won three road matchups in the series.

Drinkwitz said last year’s result hasn’t been discussed because his team sees this game as a new opportunity. 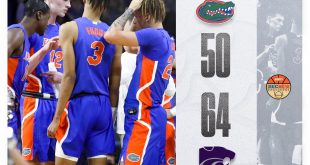