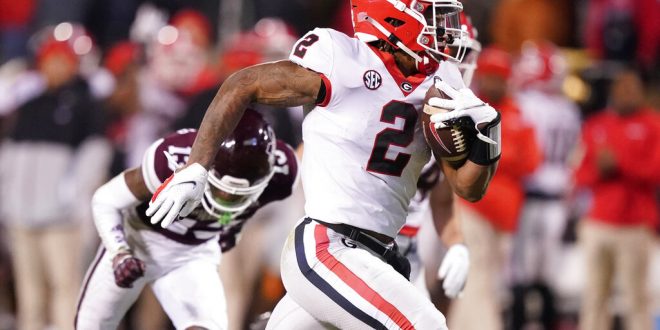 Georgia running back Kendall Milton (2) sprints past Mississippi State cornerback Emmanuel Forbes (13) on his way to a 34-yard touchdown run during the second half of an NCAA college football game in Starkville, Miss., Saturday, Nov. 12, 2022. (AP Photo/Rogelio V. Solis)

With SEC football coming to a close, it’s no secret where the Bulldogs stand. Following their footsteps from last year, the Bulldogs remain the only undefeated team in the SEC conference.

When asked about their upcoming game, head coach Kirby Smart said it’s going to be physical.

“We’re going to head to Lexington this Saturday, for what’s a physical, physical game. Every year we play Kentucky, coach Stoops’ teams are one of the toughest to play against in terms of their defensive philosophy and how they play defense and physicality. They play in the running game on offense so year in and year out it’s one of the toughest games and it’s also on the road this year.”

Smart knows what his team is capable of. On the road or at home, he has been able to watch and learn just what his players are able to do. This is a different turf than what his team is used to, and Smart said you can’t take playing on the road in the SEC for granted.

“You have to have experience doing it in order to understand there’s some things you can and can’t do. Knowing the difference in that and knowing your players handling it well, that’s the number one thing is the mental disposition of the players and what they’re getting in to.”

The Georgia fans are ready and so is the team. Smart is confident in his players and knows that they are ready for this game.

Kentucky is currently ranked No. 5 in the SEC East conference. Going up against No. 1 Georgia can seem a daunting task for some, but head coach Mark Stoops is confident in his players.

When asked to make a comment about his team, Stoops said he gives Vanderbilt credit for its win over the Wildcats, and Kentucky needs to make some improvements.

“Obviously coming off a tough loss for us a week ago, I give Vandy credit. They really did a good job they came in here a beat us and so we’ve got some improvements to make. I like the way our team has responded; you don’t have much time to feel sorry for yourself when you have a team like Georgia coming in. Once again Kirby has a fantastic football team. Good in all three phases, can hurt you in any area at any time. They’re a good team and we’re preparing and getting ready for another big game at home.”

Stoops also commented about Georgia’s defense, speaking about how they really have seen no drop off.

“They’re developing and recruiting and so they’re plugged in and ready to go so there’s absolutely no drop off.”

Kentucky knows that this game will be a challenge for them, but they are taking it in full stride. With a game like this, there is no time for either team to slack and not put their best foot forward. Stoops is confident in the way his team plays and is very proud of them this season.

The game will be held at 3:30 in Lexington, Kentucky.

Meg Matthews is a Junior at the University of Florida, studying Sports Journalism.
Previous UAB visits Death Valley to take on No. 6 LSU
Next Santa Fe Takes Down Tallahassee in Controlling Fashion, Winning 76-60