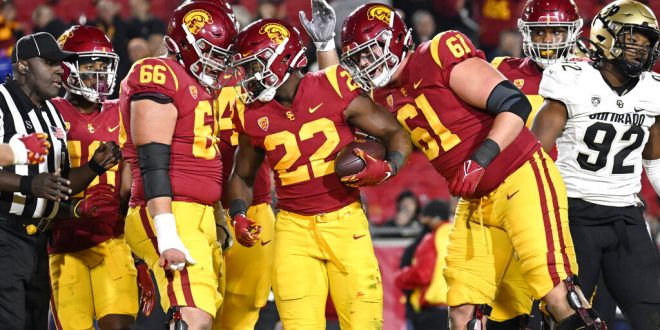 Southern California running back Darwin Barlow (22) is congratulated by offensive linemen Gino Quinones (66) and Joe Bryson (61) after scoring a touchdown in the fourth quarter of an NCAA college football game against Colorado, Friday, Nov. 11, 2022, in Los Angeles. (AP Photo/John McCoy)

The third College Football Playoff Rankings were released Tuesday. There are six Pac-12 teams ranked, the most of any Conference.

This is the first time since 2016 that the Pac-12 has six teams in the CFP Rankings.

USC is now the highest-ranked team in the Pac-12 and sits at the top of the conference standings. They checked in this week at No. 7 in the rankings after beating Colorado 55-17 this past weekend. This is the highest they have ever been ranked in the CFP Rankings.

Utah defeated Stanford this weekend and jumped to No. 10. This is the highest the Utes have been ranked in the CFP Rankings since 2019.

Oregon dropped to No. 12 after a close loss in a big matchup against Washington. The Ducks were still in the position to possibly receive a Playoff berth if they were able to win out. Following this loss, it seems like the opportunity is no longer on the table for them this season.

UCLA dropped to No. 16 after they were defeated by Arizona, while Washington rose eight spots to No.17 after taking down Oregon.

Oregon State is back in the CFP Rankings this week coming in at No. 23 as they prepare to face off against Arizona State this weekend.

There will be two ranked matchups in the Pac-12 this weekend. As of right now, USC, Utah, Oregon, UCLA, and Washington are all still in contention for the Pac-12 title.

The second matchup is when No. 10 Utah travels to take on No. 12 Oregon. Both of these teams also only have one loss in conference play and with there being just one week left in the regular season, the winner of this game is in a good position for a title game spot.

Previous FEATURE: Elettra Neroni, A Dive Across The Ocean
Next Gator Women’s Basketball Fall to Seminoles on the Road