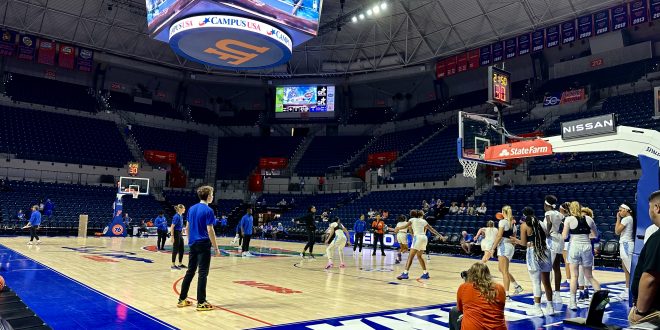 Gator Women’s Basketball improved to a 6-1 record after a hard-fought overtime win against the University of Houston on Saturday. The Gators are currently on a four-game winning streak and have only lost to Florida State this season so far, with the seniors leading the way.

The seniors on the team are leading the way to the early success. Leilani Correa, KK Deans, Nina Rickards and Faith Dut are all leaders in different aspects.

Deans leads the team in assists with 3.6 assists per game. On top of that, she is averaging 12.9 points, 3.4 rebounds, 2.4 steals and 45.5 3P%. On Saturday, she had 19 points and five assists to contribute to the win. She is averaging the highest number of turnovers in her career, however, at 4.3 TOs per game.

Rickards and Dut are both directing the defensive efforts of the team. Rickards is averaging 6.6 rebounds and 2.6 steals while But is averaging 1.1 blocks per game. Additionally, Rickards is scoring 11.7 points and Dut is scoring 5.6 points. Even so, Rickards did not perform as well on Saturday as she only managed to score 10 points on 20 FG% over 42 minutes played.

Kyle is is averaging 9.6 points and 6.6 rebounds over 18.7 minutes played. She had nine points and seven rebounds to contribute to the win on Saturday.

Rimdal is developing to become a major player for the team. Her minutes increased from 16.1 to 25.3 this season. Furthermore, she is averaging 6.1 points, 2.1 rebounds, 2.7 assists and 1.6 steals as a sophomore. On Saturday, she had five points three rebounds and two assists on 50 FG%.

The Gators will play Prairie View A&M Panthers this Wednesday. Catch coverage of the game at ESPN 98.1 FM & 850AM from 5:15 pm.