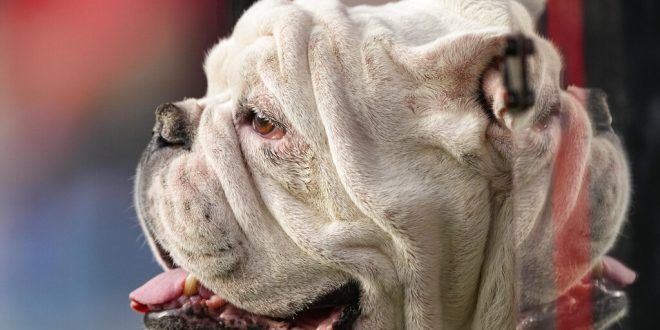 Georgia mascot Uga X peers out from his doghouse on the sideline during during the second half of an NCAA college football game against Georgia Tech Saturday, Nov. 26, 2022 in Athens, Ga. (AP Photo/John Bazemore)

The SEC regular season is over. While some teams, like Georgia, remained strong from start to finish, others grew over the course of the season.

For the second straight year, the Georgia Bulldogs finish the regular season undefeated. This marks the first time in school history the Bulldogs finish consecutive seasons without a loss.

While Georgia ended the regular season on a high, the team has more work to do.

The Tigers finished the regular season 9-3. The team fell to opponents Florida State, Tennessee and Texas A&M. Heading into the SEC Championship, LSU is coming off a 38-23 loss to Texas A&M.

The Tigers got off to a slow start, entering halftime trailing the Aggies. While the third quarter looked promising, LSU was unable to put a stop to Texas A&M’s offense. Quarterback Jayden Daniels fumbled in LSU territory, which led to the Aggies taking back the lead.

LSU will faceoff against Georgia for the SEC Championship on Dec. 3.

The Gamecocks finished the year 8-4. South Carolina finished its regular season by taking down two top-ten teams — Tennessee and Clemson.

South Carolina knocked Clemson out of the College Football Playoff race after coming out on top with a narrow 31-30 victory. This win propelled the previously unranked Gamecocks into the No. 20 slot in the AP Top 25 College Football Poll. The team finished its season ranked for the first time in nine years.

Head coach Shane Beamer has accumulated various achievements in his two years with the Gamecocks. Because of his successes, the university is looking into a new contract, which may include an extension and a raise.

The Tennessee Volunteers accomplished a mid-season victory over Alabama. However, the team’s hopes for a perfect season and a championship were crushed by SEC rivals Georgia and South Carolina.

While Tennessee was unable to come out on top of Georgia in the SEC East, the Volunteers accomplished various feats this year. They finished the season in the top ten for the first time since 2003 and broke the school record for points. The Volunteers ended their regular season on a high with a 56-0 win over Vanderbilt sitting at No. 7 in the AP Poll.

Now, the team waits for a berth in a bowl game.