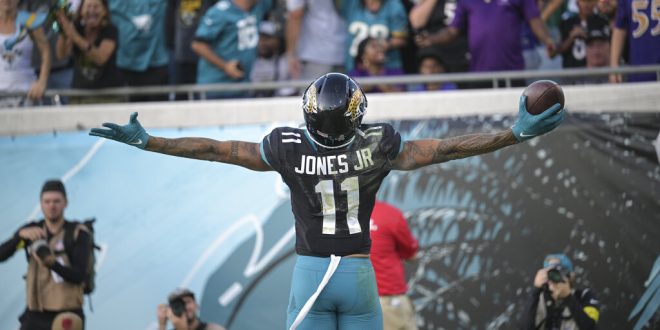 Jacksonville Jaguars wide receiver Marvin Jones Jr. (11) celebrates after a touchdown during the second half of an NFL football game against the Baltimore Ravens, Sunday, Nov. 27, 2022, in Jacksonville, Fla. (AP Photo/Phelan M. Ebenhack)

Coming off a comeback victory over the Baltimore Ravens, the Jacksonville Jaguars have momentum heading into the final five games of the season. While they do hold a record of 4-7, six of their seven losses have been within one score.

The Jaguars completed a 2021 season that was everything but positive. Former head coach Urban Meyer didn’t even make it a full season with the team. He was fired due to a series of off-field incidents that led the team to a 2-11 record in their first 13 games. During the offseason, they hired Doug Pederson as their new head coach.

Pederson is an established coach who won two NFC East Championships and a Super Bowl with the Philadelphia Eagles. In his first 11 games, the Jaguars have seen many improvements.

Pederson’s first success in Jacksonville has been the fact that he has won over the locker room. This is evident by the resiliency of the team, recording wins against the Colts, Chargers, Raiders and Ravens. According to Jaguars beat reporter Mike DiRocco, Pederson is the opposite of Meyer, and he’s just what the Jaguars needed.

While there have been many other changes to the Jaguars’ personnel, this change in leadership has made a major impact. DiRocco said that Pederson is the biggest reason why the team is trending in the right direction.

Another encouraging factor for Jacksonville is quarterback Trevor Lawrence. He’s beginning to look like the franchise quarterback the Jags hoped he would be. In their win against the Ravens on Sunday, he threw for 321 yards and three touchdowns. He completed 78.4% of his passes and had a 129.8 passer rating. In the fourth quarter alone, he went 15 of 19 for 173 yards.

In their games against Las Vegas, Kansas City and Baltimore, he combined to complete 76.9% of his passes for 815 yards, recording six touchdowns and no interceptions.

Defense improvements to be made

The defensive side of the ball still needs improvement, but the unit has been performing at a higher level compared to last year. As DiRocco pointed out, the defense needs some playmakers to take them to the next level. If they are able to pick up some standout defensive players in the offseason, look for the Jaguars to become a threat within the next few seasons.

The Jags will travel to Detroit to take on the Lions on Sunday at 1 p.m.
Share