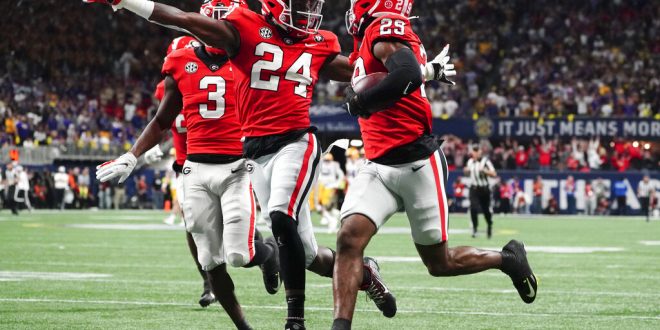 Georgia defensive back Malaki Starks (24) reacts as Georgia defensive back Christopher Smith (29) returns a blocked LSU field goal attempt for a touchdown in the first half of the Southeastern Conference Championship football game Saturday, Dec. 3, 2022 in Atlanta. (AP Photo/John Bazemore)

The Bulldogs will compete for their second straight national title. The team finished undefeated in regular season, going 12-0 and kept the momentum rolling to secure the Southeastern Conference championship.

The defending national champions dominated in the SEC championship game, coming out on top over LSU 50-30.

Quarterback Stetson Bennett led his team to victory, throwing for 274 yards and was 23-for-29 on passing. The quarterback also threw a season-high four touchdown passes.

Also, after a blocked LSU field goal attempt, defensive back Christopher Smith ran 96 yards for a touchdown, while the Tigers sat back and watched.

Smartest man on the field. pic.twitter.com/Ohg2aW2oLX

The No. 1 Bulldogs will look to keep their post-season alive as they take on No. 4 Ohio State in the Peach Bowl on Dec. 31.

The Wolverines beat Purdue 43-22 to secure back-to-back B1G championship titles for the first time since 2003-04. However, Michigan is not done yet. No. 2 Michigan will take on No. 3 TCU in the Fiesta Bowl on Dec. 31 in the national semifinals.

To secure the championship, quarterback J.J. McCarthy threw for three touchdown passes. Also, running back Donovan Edwards aided in the victory. He ran for 185 yards and a touchdown.

While TCU fell in overtime to Kansas State in the Big 12 Championship, the team stayed at No. 3 in the AP Poll. It is set to play Michigan.

After the Horned Frogs’ narrow 31-28 loss to Kansas State, it was questionable whether the team would make playoffs. However, the selection committee kept TCU at No. 3, edging Alabama out of the top four.

This selection for the College Football Playoffs is TCU’s first in program history.

The #TCU Horned Frogs are heading to the College Football Playoff as the No. 3 team. They’ll face Michigan in the Fiesta Bowl.

One of the greatest and most improbable stories in all of sports. pic.twitter.com/4pETl7HdG9

The No. 4 Buckeyes are set to meet the Bulldogs for the second time in program history.

The team’s last appearance was a matchup against Michigan, who handed it its only loss of the season.

The last time Ohio State was the #4 seed in the College Football Playoff, the Buckeyes went on to win the National Championship. 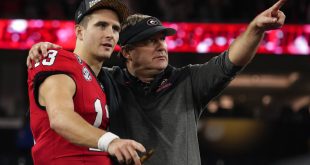 Georgia Goes Back-to-Back; Can they three-peat?

After the Georgia Bulldogs’ monster win over TCU Monday night, the focus quickly shifts to …