Call it up in the air if you will, but with just over a week to go before the start of the Florida Gators’ 2012 football season, head coach Will Muschamp has yet to settle on which of his two sophomore quarterbacks will lead the team this year. The ongoing battle between Jeff Driskel and Jacoby Brissett has remained close and competitive this Spring… so close in fact, that Coach Muschamp has decided on both of his quarterbacks splitting snaps in their home opener against Bowling Green next weekend.

However, despite the uncertainty of which of the two will actually start the game– and for that matter, the season; Muschamp says the staff and team have the utmost confidence in either of the two quarterbacks moving forward.

Muschamp went on to point out their numbers in the Spring were nearly identical, including a “62, 63 percent completion percentage [for] both of them.”

Regardless of the final decision, it’s clear at this point Will Muschamp, Jeff Driskel, Jacoby Brissett and the rest of the Florida Gators football team are chomping at the bit to get on the field for the first time. 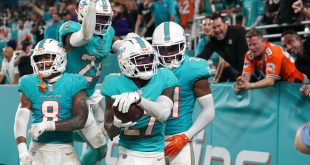 In a stunner, the Miami Dolphins upset the Baltimore Ravens on Thursday Night Football. The …