The Gator Baseball team defeated North Florida 9-4 Tuesday and got their first win out of a starting pitcher this season. The win goes to freshman righty Tucker Simpson, who pitched a total of 5.2 innings, giving up three earned runs while striking out five and walking one.

Florida jumped out to an early lead when Justin Shafer hit a two-run homer, but the Ospreys used a Corey Bass homer to cut the lead to 2-1 in the third. Florida’s catcher Taylor Gushue put the Gators even further ahead in the bottom of the fourth with his first home run of the season; his last homer was in March of 2012.

Also scoring in the fourth was senior Vickash Ramjit, who came home on a Casey Turgeon sacrifice fly. The Ospreys cut the lead to 4-3 after third baseman Paul Karmeris hit a two-run double off of relief pitcher Justin Shafer, bringing the score to 4-3 with the Gators still in the lead.

The Ospreys took a turn for the worse in the seventh and eighth innings after Florida scored two runs on right-hander Ryan McMahon and three on Trey Ferrano. The Gators took a 9-3 lead and turned to closer Johnny Magliozzi in the top of the ninth. He gave up a run, but Florida got the win.

He added that there are improvements that need to be made:

Florida is now 10-12 on the year and will next play at Vanderbilt this weekend. Starting on the mound Friday will be freshman right-hander Jay Carmichael, and junior right-hander Jonathon Crawford will start on Saturday. 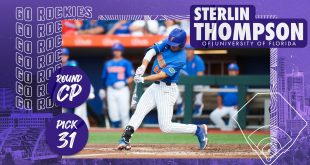