Who Gator Fans Should Cheer For in the NCAA Tournament

The Florida Gators basketball team will gear up to play Northwestern State Friday night in the first round of the NCAA Tournament.

For the fans who may not understand the dynamic of the NCAA March Madness bracket, this will break down which teams the Gators would have to play in order to have the best chance at becoming NCAA Champions.

In other words, this will show the teams to cheer for when the Gators are not playing. Naturally it makes sense to root for teams with a lower seeding because they should be less of a challenge. These scenarios are not likely to occur, but hypothetically speaking if they were to happen, the Gators would probably end up with a third National Championship. 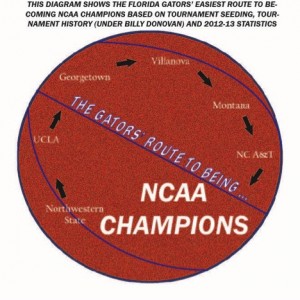 Northwestern State led the nation in scoring with 81 points a game, but the Gators only allow 53.7 points a game and are undefeated against teams in the Southland Conference under Head Coach Billy Donovan. With a top-tier defense that had a forced-turnover percentage of 22.7, according to kenpom.com, the Gators should have no problem handling the Demons who averaged 14 turnovers a game.

The second round gets interesting. Even though Minnesota is a lower seed than UCLA, history shows that the Gators would fair better against the Bruins.

The Gators have owned UCLA and the PAC-12 Conference under Donovan. Since Donovan took over in 1996, the Gators are 4-0 against teams in the Pac-12.

UCLA has a rich tournament history. It produced one of the greatest players of all time in Kareem Abdul-Jabbar (Lou Alcindor) who was coached by the legendary John Wooden. But all of UCLA’s prestige cannot change the facts.

The Bruins have not shot well from behind the arc this season making only 4.9 threes a game. The Gators led the Southeastern Conference in defensive scoring, and with Patric Young and Erik Murphy who combined for 77 blocks this season, should have no problem shutting down UCLA’s stud-freshman Shabazz Muhammad who averaged 17.8 points a game.

Should the Gators advance to the third round, some fans might be surprised as to why they should hope No. 2 seed Georgetown is the next opponent.

Georgetown was one of the hottest teams in the nation as the regular season came to an end. Its sophomore forward Otto Porter shot a staggering 42.7 percent from behind the three-point line and 48.9 percent from the field in general.

Porter, the 2012-13 Big East Player of the Year, is an efficient scorer. But the Gators were No.10 in the nation in three-point defense, according to kenpom.com. Donovan had his team ahead of the Hoyas 27-23 earlier in the year before the game was cancelled due to weather issues – that tends to happen when the game is played on a naval ship in November. The Gators are more than capable of handling the Hoyas again.

The formula is quite simple in a game versus Georgetown. Slow down Otto Porter and box out under the basket in order to win the game. The Hoyas are No. 247 in rebounding with 32.9 rebounds a game. They are among the top-50 teams in field goal percentage at 45.6 percent, but they only score about 64 points a game, again ranking them at No. 247 in the country.

That shows that they like to take their time and use the entire shot clock which feeds into the defensive style of Donovan and the Gators who have a plethora of pesky-on-ball defenders.

If the Gators were to make it to the Elite Eight, Villanova would be the easiest match-up. Although the Gators are barely over .500 against Big East teams in the NCAA Tournament, they would be the clear favorite in this match-up. Villanova’s freshman Ryan Arcidiacono’s 33.5 three-point percentage can control the momentum of a game. The same can be said for senior Mouphtaou Yarou who can pose a problem in the paint for Young.

However, with the second most efficient defense in the country, according to kenpom.com, the Gators should find themselves in another Final Four if they meet Villanova.

Having said that, Villanova beating No. 1 seed Kansas is about as likely as someone getting struck by lightning. Yes, it could happen, but everything would have to fall perfectly into place for the Jayhawks to be sent home that early.

Kansas ranks in the top 20 in almost every offensive category including field goal percentage, assists a game and rebounds a game. They also average about 75 points a game. David would need to chuck a few more stones in order to knock down that Goliath.

Facing Montana in the Final Four would be simple. Michael Frazier II’s 6-foot-4, 200 lb frame would be a tough obstacle for Montana’s junior guard Kareem Jamar to overcome. Jamar’s 14.5 points a game and 36.3 three-point percentage would mean little if Frazier II can exploit his 2.8 turnovers a game.

Again, the odds that Montana makes it to the Final Four are slimmer than a super model’s waistline. It would be tough to imagine any team beating Indiana with the emergence of Victor Oladipo.

If a National Championship Game is in the stars for the Gators in 2013, the most favorable match-up would be against North Carolina A&T who averaged 62.2 points a game, ranked No. 290 in the nation. The Gators only allowed 53.7 points on average. It would be a recipe for success for Donovan and crew. An efficient, ball-pressuring defense beats a stagnant offense – sort of like how one plus one equals two.

However Louisville, who the Gators have seemingly struggled with recently, eliminated NC A&T in the first round Thursday night. Louisville sent the Gators home last season in Elite Eight and also defeated Florida’s football team in the 2013 Sugar Bowl. Gators fans are probably sick and tired of seeing Cardinals fans celebrate.

The Cardinals have one of the fiercest defenses in all of college basketball and rebound very well. They are definitely a favorite to go the distance.

With Louisville ruining that scenario, the next best case would be for the Gators to play against St. Louis in the title game.

Similar to the strategy that would be used against Georgetown, the Gators would have to focus on slowing down junior forward Dwayne Evans, who leads the team in scoring and has averaged 235 rebounds over his college career. Young and Murphy would have to clean up on the glass because Evans does his damage down low. But if Evans is unsuccessful, his team will be as well.

Anything can happen in college basketball. There have been upsets before that have shocked the nation. So there is a chance that the dream scenario for the Gators can come true. But it is a “dream” scenario for a reason. Not every dream comes true.